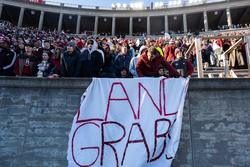 
Report on Harvard’s Endowment
A new report by a coalition of Harvard student organisations finds that Harvard’s endowment completely lacks transparency in its investments and is at the very least complicit with corporations that participate in occupations, prisons, militaries, land grabs, policing, and border control.