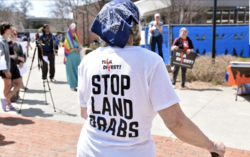 
TIAA and its Nuveen subsidiary are under fire from activist groups and nearly 300 individual pension plan clients, which today filed a complaint with UN PRI over the companies’ alleged greenwashing.
In the complaint sent Wednesday to the United Nations Principles for Responsible Investment, groups including TIAA Divest! and others said they “take issue with the significant gaps between TIAA/Nuveen’s claims of responsible investing and its investments in climate-destructive activities.” The groups asked the PRI board to investigate the greenwashing claims and address them with TIAA and Nuveen.
TIAA, one of the original signatories to UN PRI, said in a statement that it believes it is in full compliance with the organization’s principles.
Allegations
The asset manager has made climate commitments, although its investments in the fossil fuel business and holdings linked to deforestation work against those goals, the complaint stated.
The groups pointed to at least $78bn in assets invested in fossil fuel holdings, including coal. They also cited “systematic land acquisitions and land management linked to deforestation, illegality and human rights violations, including in the Brazilian Cerrado,” and allegedly misleading marketing for funds that are packaged as ESG products but contain fossil fuel assets.
Additionally, the companies have shown a “lack of accountability” to stakeholders, such as teachers with retirement savings in TIAA accounts, according to the complaint.
The groups filing the complaint criticized the firms for not pursuing divestment, but failing to show progress through a policy of ongoing engagement with fossil fuel companies.
“As other major institutions and investors divest from high-emitting assets in ever greater numbers, TIAA/Nuveen’s ongoing investments in coal, oil and gas, as well as land-based investments linked to deforestation and illegality, are financially, morally and socially irresponsible,” the complaint stated.
The groups asked PRI to engage with TIAA and Nuveen over the alleged violations of its principles. That would include corrective actions or potentially removing the companies from the list of PRI signatories, according to the complaint.
Among the requests in the complaint are that TIAA measure and disclose greenhouse gas data across its portfolios, including Scope 3 emissions. The complaint also asks that the companies set and disclose short-term and medium-term targets in line with a 1.5°C average global temperature rise. That could also include policies to divest from or exclude companies involved with fossil fuels, deforestation and land grabs that have harmed indigenous communities, according to the letter.
Data gap
Currently, many public companies don’t measure or report Scope 3 emissions, which are those related to their supplier and end users — but those emissions often represent the bulk of greenhouse gases tied to a business. How those emissions are measured is also inconsistent.
Regulators have been paying more attention to the issue, including the Securities and Exchange Commission, which is currently drafting a final version of a climate-disclosure rule for public companies.
“We understand that there is a data gap issue, so I think it’s really a question of what’s feasible,” said Hana Heineken, senior attorney at the Center for International Environmental Law, which supported the complaint. Currently, “Nuveen has very clearly stated that they have only an intention to start measuring and disclosing their Scope 1 and 2 emissions. That, from our perspective, is unacceptable, given that Scope 3 is the majority of a company’s emissions.”
As a financial services firm, TIAA is unique in that it serves academics, many of whom “are concerned about climate change, sustainability and the future of the students they teach,” Heineken said.
“They’ve been hearing from these teachers for a long time,” she said. “This [complaint] is an extension of the advocacy that has been happening for years now, that TIAA has been unresponsive to.”
Company response
In a statement, a TIAA spokesperson noted that the company “is committed to managing investments in line with a transition to a low-carbon economy.” However, “our view is that broad divestment from fossil fuels does not offer TIAA an optimal way to influence the policies and practices of issuers we invest in, nor is it the best means to produce long-term value for our investors and other stakeholders.”
Divestment across the board would not have the effect of reducing carbon emissions, as other investors would simply buy up the assets, the company stated.
Regarding land use, the firm said that Nuveen started an eventual zero-deforestation policy for farmland holdings in Brazil in mid-2018. That policy prohibits the conversion of native lands already in its portfolio and does not allow the purchase of land that has been cleared “in five distinct biomes of the country.”
“Through our investments, we help local agricultural operators and farmers grow their operations, make improvements to land, conserve resources and acquire new technologies,” the company stated.