A villager shows a container of palm oil that was destroyed by the military, police and PHC guards.
RIAO-RDC | 10 November 2022


Palm oil company, police and military conduct massive, violent rampage against villagers in the DR Congo
In September 2022, two large contingents of national police and military were dispatched to oil palm plantation concession areas of the Plantations et Huileries du Congo (PHC) in Lokutu and Boteka. According to PHC, these heavily armed contingents were sent pursuant to a request filed by PHC to the DRC government, ostensibly for support in preventing the theft of palm nuts from its plantations by villagers leaving within and around the company’s concessions. Below is a summary of what transpired, based on information collected by RIAO-RDC though its local members, interviews with affected villagers and an on-site fact finding mission to Boteka by two members of RIAO-RDC’s national office in October 2022.
Report by RIAO-RDC, 10 November 2022:
On September 17, 2022 a heavily armed contingent of at least 30 national police and soldiers of the Armed Forces of the Democratic Republic of the Congo (FARDC) arrived in Boteka, a rural community in the Province of Équateur. They were dispatched by the Attorney General, based on a request made by the company Plantations et Huileries du Congo (PHC), which operates large-scale oil palm plantations in the area, ostensibly for assistance in preventing the theft of oil palm nuts from its plantations. The soldiers and police were joined by PHC security guards and members of the private security firm G4S, which operates at the PHC plantation sites under contract, and travelled in PHC vehicles.
According to testimonies by local villagers provided to RIAO-RDC, the contingent of soldiers, police and guards went on a rampage through the local villages searching for evidence of theft. Villagers that RIAO interviewed allege that they broke into homes, arrested people arbitrarily, damaged property and committed numerous other human rights violations. There are allegations that they physically beat and tortured villagers, shot and injured several villagers, raped village women and burnt down people’s homes. The villagers say there was no possible justification for such a large-scale crack-down. Several hundred households from the villages of Mokoso, Ifoma, Duali, Bofalamkoka, Kelengo, Ilongo, Nseke, Bonzoku, Bolondo and Bempumba are said to have fled into the neighbouring forests to take refuge 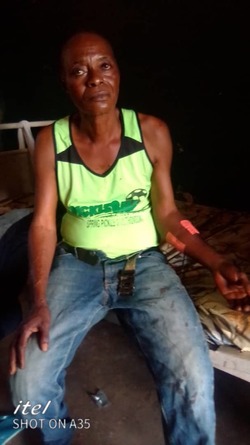 One man who owns a small convenience store in Boteka says that a group of at least 30 armed soldiers and police arrived in three vehicles (jeeps) belonging to PHC. They got out of their vehicles, starting firing their weapons and rounding up people on site and ransacking people’s homes, stores and stalls. They entered his store and took him into their vehicle along with several others, without providing him with any explanation. They drove him and the others 3km out of town where they beat them and fired shots at them. He was hit in the arm. Afterwards he was taken to the company health clinic where his arm was bandaged. His wife and kids fled into the forest to take refuge.
The situation is similar in Lokutu, in Tshopo Province, where PHC has its largest oil palm plantation concession. In mid-September the company suddenly issued a ban on the possession of palm oil by villagers in its concession area. As in Boteka, palm oil is a critical staple food for the local people, and the most important source of livelihoods for people in the area. Soon after, a heavily armed contingent of national police and FARDC soldiers arrived to enforce the ban. They proceeded to forcefully enter people’s homes, make arbitrary arrests, destroy people’s property and homes and commit numerous other human rights violations.
Several villagers allege that the armed contingents in Boteka and Lokutu ransacked people’s artisanal palm oil mills that are supplied with nuts from their own small areas of land. For example, in the Lokutu area, Mr. Alphonse Mongulu has his own parcel of 10 ha where he cultivates and harvests oil palms and produces his own palm oil. In the middle of the night of September 24, 2022, Mr. Mongulu says a contingent of armed national police, soldiers, PHC security guards and guards of the private security firm G4S arrived at his lands in three PHC trucks. While firing shots, they arrested his eldest son as well as two men and two women who were with him (one who was pregnant). The five were beaten and transported during the night to the central prison in the provincial capital Kisangani. Mr. Mongulu escaped by fleeing into the forest. He is adamant that he has all the palm nuts that he needs from his own lands, and has never taken nuts from PHC’s plantations.
But, for most villagers living within the PHC concession areas who do not have access to their own lands for farming, they have little choice but to occasionally take small amounts of nuts from the PHC plantations in order to survive. For over a century now, PHC has occupied the ancestral lands that the communities traditionally used to harvest oil palms and cultivate food crops, based on an initial, illegal and violent land grab during the Belgian colonial occupation. Without these lands, the villagers are completely dependent on the company for their survival. However, the company only provides a very limited number of full-time jobs, and most of the jobs offered to local villagers are as day labourers, with low wages that cannot cover the costs of living. In this context, many villagers are forced to take nuts from the plantations to produce their own palm oil— a staple food in this part of the Congo. According to local villagers, this situation has existed for many years. What is new is the scale of the violent repression that PHC has unleashed, without providing the villagers any other means to ensure their food security.
On September 21, 2022, an article was published about the situation in Boteka on the website Congo au jour le jour with an interview of a local villager and member of the PHC permanent workers union, Pasteur Bolisomi. In the interview, he describes the violent rampage that the villagers have been subjected to by the military and police contingent.  A few days later, on September 26, 2022, three community leaders from the Boteka area filed a formal complaint through PHC’s grievance procedure against two employees of PHC: the Director, Levis Lutete and the head of personnel Joel Yaya. In their complaint, the three village leaders allege that these two men illegally ordered a military and police contingent from Mbandaka and Ingende to intimidate the villagers in the Boteka area. The complaint states that the police and military have “beaten, raped, stolen, burnt and destroyed homes, fired shots injuring people, made incursions, displaced villagers— inhuman punishments, of a cruelty never seen before, only to take the palm oil produced from independent plantations (i.e. the oil palms of villagers)”. The complainants asked that the two PHC employees be suspended and sent out of Boteka. They also called on PHC to compensate the villagers for all the damages caused by the military, police and the PHC security guards.
No actions, however, appear to have been taken by PHC or by the governmental authorities to stop the violence and human rights abuses. Rather, RIAO has received more reports of violence committed by the police and military throughout October and into November.
On October 19, 2022 a delegation of two RIAO-RDC members arrived in Boteka to gather evidence and to try and find a peaceful resolution to the situation. However, when they arrived at the local company offices, they were informed by the local staff that they would not be received since they had entered the company’s plantations without permission.

Ms Cécile Boita showing injuries she sustained from the military, police and PHC guards.
On October 25, 2022, a contingent of PHC security guards and armed policemen set off at midnight in four PHC company trucks towards the villages of Wamba and Bongemba. Villagers RIAO spoke with say that over the course of the night, the guards and police violently attacked many families and made numerous arrests. Twenty villagers were reported to have been hospitalised due to injuries sustained that night. In one of the villages, Yakote (in the groupement of Bolesa), 10 people were arrested and beaten, with three of them ending up in hospital. One of the two women who was arrested is Ms. Cécile Boita. She was arrested at her home around 4am in the morning. In the photo, you can see the injuries that she sustained to her arm. Another photo shows those who were arrested and detained at the holding cell in the village of Yangambi.
On October 28, 2022, PHC published an article in Scoop RDC claiming that the October 25th police intervention in Lokutu was initiated at the behest of community leaders concerned that some villagers were stealing from the company and had become violent with other community members. PHC claimed that the villagers violently attacked the police contingent and that no members of the community were injured during the police intervention. PHC claimed the police intervention succeeded in “dismantling a vast criminal network in Lokutu”.
On November 6, 2022, it was reported to RIAO that 21 community leaders were being transferred to the provincial prison in Kisangani. Alphonse Mongulu was able to avoid being sent to the prison by paying a large ransom. He says around 300 litres of palm oil produced on his land was taken by the contingent of police and PHC guards. 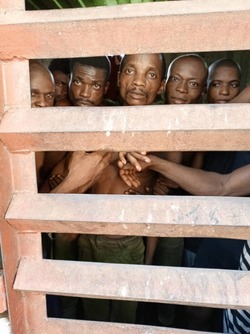 Community members being detained at a holdign cell in Yangambi, awaiting transfer to the central prison in Kisangani.
On November 9, 2022, RIAO received an alarming report that one of the community leaders from Lokutu who was arrested died while being transported by boat to the Kinsangani prison. RIAO is demanding an urgent investigation into this possible crime by the DRC government.
The police and military crack-down in Lokutu and Boteka followed a visit by a delegation of the International Complaints Mechanism panel to move forward with a mediation process between PHC and 11 villages, which was initiated by village leaders over three years ago. The actual mediation was supposed to begin in November this year, but it is not possible for a just mediation process to take place in such a context of insecurity and repression.


However, RIAO notes that PHC is attempting to set up a parallel mediation process through the elected national deputy for Ingende territory, the Honorable Bompanze. RIAO denounces this attempt which can only undermine the mediation process of the International Complaints Mechanism.
All this takes place in a context of deterioration of the daily life of PHC workers. Several workers have presented their complaints about the misappropriation of final accounts and the soaring Ikotama debt phenomenon. The chairman of the Mokoso Elders' Committee accused the PHC's accounting and personnel department officials of being responsible for this ongoing mafia practice. 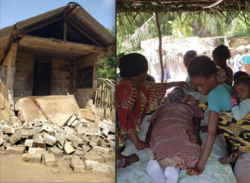