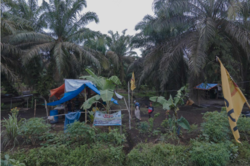 Huts set up by local residents in the lands they occupied in PT Anam Koto’s concession. Image by Jaka Hendra Baittri for Mongabay.
Mongabay | 9 November 2022


WEST PASAMAN, Indonesia — Eren says he can’t forget the day in 2000 when he fled from the plantation security guards. He had joined fellow residents of Nagari Aia Gadang village, in West Pasaman district on the island of Sumatra, to meet representatives of PT Anam Koto about the community’s entitlement to a proportion of the company’s oil palm plantation area.
“All of a sudden a red motorbike and a red car carrying personnel arrived,” Eren told Mongabay.
They chased Eren and the others. Moments later, Eren was dripping with sweat, short of breath, and limping past trucks carrying oil palm fruit. As he lost consciousness, he could no longer feel the punches connecting with his body.
When Eren came to, he found himself in the company’s office surrounded by people. He was then taken to hospital and detained.
More than two decades later, the land conflict here in Nagari Aia Gadang persists over a nationwide problem that continues to hold back a large share of Indonesia’s smallholder farmers: plasma.
Since the 1980s, companies in Indonesia have cut deals with communities to share a proportion of their plantations, in plots widely known as “plasma,” part of efforts to gain support and access to financing. Under a 2007 law, providing plasma became legally mandatory, with firms required to give at least 20% of any new plantation area to communities.
Plasma was intended to support rural families in oil palm heartlands by ensuring community access to land, seeds, fertilizer and a guaranteed buyer: the corporate plantation.
Ministry of Agriculture data in 2020 showed there were 7.7 million hectares (19 million acres) of land allocated to oil palm plantations in Indonesia, the world’s biggest producer of palm oil. However, the ministry recorded only 617,000 hectares (1.52 million acres) of plasma farms, around 8% of the total corporate concession base.
The disparity reflects the gulf between central government planning and implementation on the ground by devolved local administrations, environmental activists say.
In 2020, the chair of the Indonesian Palm Oil Association (GAPKI), Joko Supriyono, said the national government would have to end the prohibition on new oil palm permits on peatland and in primary forests in order to see an expansion of plasma land.
“The development of new plasma farms can be done only if there are new permits,” Joko said at the time.
Unfulfilled plasma obligations are a common source of the ubiquitous land conflicts in Indonesia. A joint Mongabay investigation into the plasma program recently found that at least 155 companies had been accused in the past decade of failing to provide plasma, according to a review of local news reports and other publicly available sources.
At least 11 of these cases were located in West Sumatra, with five in the district of West Pasaman alone.


In 2019 the Roundtable on Sustainable Palm Oil, the world’s largest association for ethical palm oil production, accepted a complaint that residents of two villages in West Pasaman had been denied plasma by an Indonesian subsidiary of palm oil giant Wilmar International.
The two villages, Nagari Sasak and Nagari Kapa, alleged losses of 500 billion rupiah ($31.9 million) since 1997, the year the company pledged to provide 1,435 hectares (3,546 acres) of plasma.
The tally of 155 companies did not include companies like PT Anam Koto, whose plasma dispute had not previously surfaced in media reports. But today, residents in Eren’s village of Nagari Aia Gadang still run the risk of imprisonment as they continue to press their claim to 20% of PT Anam Koto’s concession.
Frustrated by the lack of progress, in February residents took matters into their own hands by occupying an area of 711 hectares (1,757 acres), which had been determined as a plasma allocation by the West Pasaman Agrarian Reform Task Force (GTRA) team.
“We occupied the land, built huts and planted seedlings as a kind of protest to Anam Koto and the government regarding their obligation to give 20% of the land for plasma,” said Akmal, chair of the Indonesian Peasant Union (SPI) in Nagari Aia Gadang.


The company asked the community on what grounds they had occupied the land. The community responded that this was the allocation due to them under the government’s plasma rules.
“We hope that the local government will push together so that our rights will be granted,” Akmal said.
During the six-month period after the occupation, the company cut down banana and coconut palms, and removed avocado and durian trees.
In April more than 30 security guards knocked down 11 wooden farming huts built by the community.
In May, Nagari Aia Gadang farmers alleged that security officers had poisoned the seedlings they had planted in the previous months.
“That’s when the community defended itself, so that the plants would not be poisoned by the company,” Akmal said. “There was an argument and a scuffle. Accidentally some people pushed the security coordinator in the back.”
On July 14, villager Wisnawati, who like many Indonesians uses one name, spent a night in prison with her 3-year-old child after she was reported to police following an altercation with the company’s security chief.
Wisnawati saw security officers approaching the land with atomizers, which she presumed was to douse trees with herbicides. Thinking on her feet, she decided to intervene.
“I’ll chase them away so our plants don’t get sprayed,” Wisnawati said at the time.
Wisnawati’s account is that she clashed briefly with company security, and that she pushed the company’s security chief in the altercation. Her only aim was to get them to leave the area, she said.
It wasn’t long before she received a summons from the police to appear for questioning on suspicion of common assault. Four others were arrested and detained: Idamri, 39, Jasman, 45, Safridin, 41, and Rudi, 31.
To help compensate their families for lost earnings, the local farmers’ union collected donations every Friday. The provincial branch of the Legal Aid Institute (LBH) chipped in by raising funds from Jakarta.
The arrests have deepened the stress and sense of injustice felt in Nagari Aia Gadang.
“The children don’t want to go to school because their fathers haven’t come home yet,” said Susi, a Nagari Aia Gadang resident who participated in the reclaiming of the land from the company.
Rudi’s wife cried while sitting outside court. The family had lost the main breadwinner. Her children appeared despondent.
Mongabay contacted Hendra Putra, the West Pasaman district government secretary, for comment.
Hendra directed Mongabay to Setia Bakti, an aide to the elected district head.
Setia said the conflict fell under the jurisdiction of the West Pasaman Land Agency.
This year, the district head issued a decree stating that the company should hand over 10% of its concession to the community. That was based on an agreement reached in 1990 between the company and the village, Setia said.
West Pasaman police chief Muhammad Aries Purwanto did not respond to requests for comment.
The district police’s head of criminal investigations, Fetrizal, said the conflict in Nagari Aia Gadang remained under investigation. Fetrizal added that any agreement between the company and community was not enforceable as a breach of criminal law, and that the land-use permit, known by its Indonesian acronym HGU, held by the company was the prevailing document.
Advocacy by the Legal Aid Institute, citing the 1960 Basic Agrarian Law and the results of the local task force, were not enforceable by police, Fetrizal said.
“If it’s a land issue, if you feel there is a discrepancy, then please submit it to the civil court,” Fetrizal said.
Tamba, a lawyer for PT Anam Koto, disputed the basis of the community’s claim to the land within the company’s concession permit.
“We do not want further clashes,” Tamba said. “Yes, we made a complaint to the police.”
Tamba said the community claim to 20% of the PT Anam Koto concession was not valid because an agreement had been reached in 1991 with the local community — which preceded the 2007 law establishing the 20% plasma requirement.
“Twenty percent is what year’s rule? What year was our [right-to-use permit] issued?” Tamba said.
Residents of Nagari Aia Gadang said that without access to wider agricultural land, their ability to improve their livelihoods was limited, holding back prospects for young people in the community.
“It’s about the future for the children,” Wisnawati said. “It can be used to send the children to school.”