Bananas, beef and gold: China’s appetite drives ‘Made in Laos’ brand, but at what cost? 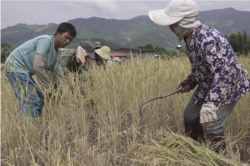 by Aidan Jones
As soon as the rice is harvested, the corn is seeded; three months later it’s watermelons then bananas, cash crops grown year round on farms in Laos rented by Chinese investors to feed China’s insatiable appetite for fresh produce – and all done at a premium.
‘Made in Laos’ has become a banner of quality in China’s supermarkets, as part of a decade-old trend that started with bananas but is branching out into new crops – many like corn, which are unwanted in the domestic market but grow fast in Laos’ climate.
The highest grades of bananas in Oudomxay province in northern Laos go for 150 yuan (US$21) per stalk in China. Watermelons sold in pairs fetch twice that amount, farmers say, while corn – in a country that does not eat it – smothers hillsides ready to be tinned or processed for animal feed.
Demand from across the border has changed the incomes of countless Laotian farmers who used to get by on just two or three yearly rice harvests, with months of downtime in between, in what is one of Asia’s poorest nations.
Now, the day rate for farm labour is around US$5-7 in many areas, an increase of about a dollar according to local farmers. But most importantly, the work is year round, rather than seasonal.
“We have built new houses,” says Nang, 47, as she prepares lunch for a dozen others scything through ripe rice stalks across several hectares of land.
“We have work across the whole year now … we barely take days off. Once the rice is harvested we’ll plant the corn almost immediately. It goes on like that for many months.”
New money is driving up annual wages in some of the poorest parts of Laos – a country that the World Bank said in 2021 had an average per capita income of US$2,551 a year, which is around 65 per cent higher than a decade ago.
But the demand is also gobbling up land as Laotian farms pivot to a Chinese market that is also seeking cassava, oranges and beef.
In the lowlands near the capital of Vientiane, durian is taking off, another non-native species that’s highly-desired inside China, which is now linked to its poorer southern neighbour by a high-speed railway.
In 2021, Laos earned more than US$900 million from agricultural exports, according to data from the Lao Trade Portal website. More than 80 per cent of those went to China.
New deals have set the direction of travel.
The country agreed to export 100,000 tonnes of peanuts, cassava and bananas to China between 2021 and 2025, Chinese state media reported last week, while a joint venture with a Tianjin-based agricultural firm has agreed to “large-scale healthy breeding of cattle”. Laos has been given a quota of 500,000 head of cattle for export to China.
Environmental groups and Laotian smallholder farmers fear that runaway plantation growth – and industrial-scale cattle farming – will overwork the land and undercut plans for tree regeneration in one of Southeast Asia’s most forested nations.
There are also fears Laos’ debt crisis – the country owes billions of dollars to foreign governments and companies that have built its infrastructure – is leaving it exposed to unethical investments.

Mining concessions are causing particular concern – Laos exported US$55 million in gold and gold bullion last year – and several Chinese companies hold rights to vast tracts of ore-rich land in the middle of remote, pristine forests.
“We’re at a critical juncture,” said Seán O’Connell Head of Governance at the United Nations Development Programme in Laos.
“Investment can bring huge economic benefits to recover from the current crisis, but equally certain investments can seriously undermine social and environmental development, and in the longer term cost the country more than it benefits.”
The country’s government has taken action against some dangerous farming practices.
It banned new concessions for banana plantations using certain pesticides and preservatives, after complaints from villagers about sickness and the toxic run-off that makes its way into water sources and soils shared with natural forests.
But in an unintended consequence of the country’s breakneck development, ethnic groups at the bottom of the economic ladder are being pushed to farm further into forested hills as the best land goes to Chinese investors.
Sai, a 38-year-old of the Khmu ethnic group, says his community has resoundingly lost from Chinese investment after being relocated for a Chinese dam on the Beng river, exiled from their farmland and forced to leave their livestock behind.
“Now we work for the Chinese but we can’t feed ourselves,” he said. “Some months we’ve got work and others we don’t.”
Mekong locals reel from fish crisis as dams sprout up from Laos to China
Clean business advocates have urged foreign investors eyeing Laos’ land and natural resources to help raise – rather than erode – standards in a country only just emerging from decades of isolation.
“Businesses that have strong commitments to working responsibly should bring that culture with them to Laos,” O’Connell of the UNDP added.
“There is a willingness among Laos’ businesses to learn from international businesses on how to balance growth with respect for social and environmental standards.”