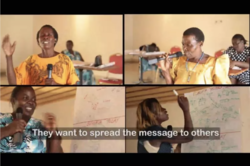 The oil palm plantations of BIDCO, a company partially owned by Wilmar, in Kalangala Island, Uganda, generated devastating impacts. The company plans to expand to Buvuma Island, however, they keep confronting strong organized opposition!
In Uganda, oil palm is not native. It was in the 1990ies that the government, with support from the World Bank and the United Nations’ International Fund for Agricultural Development (IFAD), started to set up a national Vegetable Oil Development Programme, where the main crop planted were oil palms.
The government of Uganda established a bidding process to select a company that could plant oil palms, build a crude palm oil mill, and carry out an outgrower program. The government was responsible for securing the land for the company among other benefits like several tax incentives. (1) In 2003, a public-private partnership agreement was signed between the government of Uganda and BIDCO, a company partially owned by multinational company Wilmar. Wilmar is the second largest international oil palm plantation operator in Africa, after Socfin, with abundant track records linked to human rights violations. (2)
Outgrower or smallholder programs, also known as contract farming, are used by plantations companies to gain more access and control over community lands. Peasant farmers grow oil palms on their land, and in turn, the company will buy all the oil palm fruit they produce. Governments usually support these schemes, which are presented as a win-win deal. But in fact, they are a trap. Peasant farmers accumulate debt right from the start, lose the freedom to decide who to sell their production to, face strict restrictions on planting other crops, give up autonomy and even their land, among other major consequences. (3)
The signed agreement mentions the promotion of 40,000 hectares of oil palm plantations in the country. Around the year 2005, BIDCO started its industrial plantations in the Kalangala island, with nearly 10,000 hectares of which almost two thirds are company plantations while the rest are under outgrowers program.
As it happens in most countries, oil palm plantations’ companies reach the communities with a lot of promises. As a way to convince people, the company invited community members to meetings and seminars where many promises were made and as a result many were tricked into sigining documents and consenting deals with the company that later were used to grab their land.
The experience from the people in Kalangala island is devastating. They have seen their lands grabbed, their forests destroyed, their water contaminated. People have been arrested and tortured when opposing the company, and women and children have been displaced and have nowhere to stay.
BIDCO was planning to start expanding its plantations in Buvuma island in 2012, however, securing land resulted very difficult for the government. They confronted strong organized opposition against the company and the governments’ plans to displace the communities. Still today, the company has not been able to advance as they initially envisaged. Communities resistance has been fertile!
The short 6 minute video below shows how the communities in Buvuma island, and women in particularly, are resisting the expansion of BIDCO’s oil palm plantations in their lands. It is also a call to resist and an alert for other communities that might be facing the same threats, to not enter into the oil palm business:
(1) World Law Group, Uganda: Tax Incentives for Foreign Direct Investment, 2022.
(2) Chain Reaction Reserch, African Oil Palm Expansion Slows, Reputation Risks Remain for FMCGs, 2022.
(3) WRM, Nine Reasons to Say NO to Contract Farming with Palm Oil Companies, 2022.