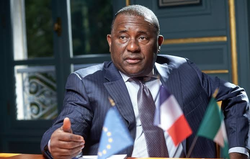 Abdul Samad Rabiu, chairman BUA Cement. BUA had indicated that its intention was to develop farmland within the 50,000 ha concession.
Premium Times | 18 October 2022


BUA Group rejects Kogi govt’s 50,000-hectare land, says it’s unfit for its project
By Ronald Adamolekun
Abdul Samad Rabiu’s BUA Group will cease from furthering the purchase of an expanse of land measuring 50,000 hectares it was invited to procure a decade ago by the Kogi State Government, the conglomerate said, citing its unsuitability for its investment push.
The group, according to a letter seen by PREMIUM TIMES, disclosed it has not taken ownership of the asset since the arrangement after survey revealed the land’s largely hilly topography leaves only about 30 per cent of it useful. BUA’s businesses encompass cement making, food processing, real estate, mines & steel and ports operations.
The property became a subject of discord between the two this month when the Kogi State House of Assembly directed the group to appear before it, insisting no payment has been made to consummate the transaction dating back to 2012.
“We are having problems with the BUA Group over 50,000 hectares of land it acquired in 2012 and even obtained a certificate of occupancy (C of O) but has not paid a kobo for the land,” said Alfa Momoh-Rabiu, the deputy speaker of the state’s legislature.
Dangote Cement, BUA Group’s principal competitor, is facing a similar but fiercer conflict from the state government over ownership of its Obajana Cement plant.
“Since our invitation by the state in 2012 to invest through that land, there has been no visible effort by the state and successive governments till date, to address the issue of access (i.e. infrastructure, roads) that will enable us utilise the land for its intended purpose,” the letter said.
BUA Group, which Rabiu Nigeria’s second and Africa’s fifth most affluent person according to Forbes controls, stated that the land can only be reached by way of water, making it not a bankable venture unless infrastructural intervention by government opens it up.
“There has been a massive deterioration of security in and around the area for the past few years making it practically impossible to start any project there as an investor.”
An intimation in a paragraph of the written communication shows BUA Group may not settle all dues and remunerate the state and other parties involved on the grounds that the deal did not thrive.