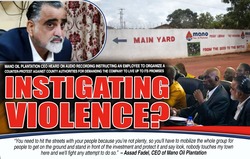 
By Francis G. Boayue
TUBMANBURG, Bomi County – The CEO of the Mano Palm Oil Plantation, Mr. Assad Fadel has been caught on tape instructing the head of his company’s private security, to mobilize residents of Bomi and Cape Mount to stage a protest against residents in his favor against the residents of the communities where his company operates.
The residents of the Project Affected Communities (PAC) have been agitating over the company’s failure to live up to its concession agreement.
In the leaked audio, Mr. Fadel is heard calling for a protest action against the Deputy Coordinator on National Concessions Conflict Resolution at the Ministry of Internal Affairs, Adama Seh, who once served as corporate communication manager for his company to be dismissed for not supporting the company against the citizens.
Mr. Assad Fadel asked Abdulia Navo, head of his company’s security company to rally the people of Madina to go against the project-affected communities (PAC) and Mr. Seh.
The Mano Oil Plantation CEO said: You need to have an emergency meeting and have a strong demonstration against the project-affected communities and come out on the streets with your people and hold placards calling for the dismissal of Adama Seh and this must go political and be very tough with all your people behind you, and with that, you’ll put everybody now on the alert to go against the project affected communities.”
He further said: “You have to fight back because you just joining the people and you suppose to have your men on the street fighting with placard PAC Must Go”. ‘PAC is Wrong’, and with that, you’ll push the people on the ground and counteract them with the people of Madina who really want the investment because this whole thing is political.”
Meanwhile, the Ministry of Internal Affairs in a dialogue on Tuesday, has called for calm in providing remedies and ensuring peace and stability is restored at the Mano Palm Oil Plantation amongst workers, residents of the Project Affected Community and the Mano Management.
Senjeh District Representative Hon. Finda Alice Gborie Lansanah took the lead and stressed the plight of the project Affected Community, and the workers both in Bomi and Grand Cape Mount Counties respectively.
According to Rep. Lansanah, “The Mano Company must live up to its promises as within the Restated and Amended Concession Agreement in providing improvements and social services to the workers and the affected communities in and around the concessionaries areas in line with its responsibilities”.
Highlighting issues, among others, the Senjeh District Astute Representative outlined the need for the worker’s children attending the Mano Central High School to receive both national and international scholarships at any university level and that workers working with the company must be accorded all benefits and opportunities that will improve their conditionalities.
Since taking over from Sime Darby, Mano Palm Oil Plantation has often been accused of bad labor practices and its failure to live up to the terms of its concession agreement. The company has, however, contended that it has a very good relationship with its employees and the communities where it operates.