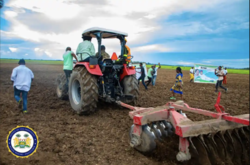 President Bio launching the Torma Bum rice farming project.
Awareness Times | 17 December 2020
Vice President Jalloh launches $54 million agriculture project, assures of 2000 Jobs
On Monday 14th December, 2020 the Vice President of Sierra Leone Dr. Mohamed JuldehJalloh launched a fifty-four million (54,000,000 USD) United States Dollars agricultural project at Gbinti Walla in Lokomasama Chiefdom, Portloko District. Vice President Jalloh Revealed that the agricultural project will create two thousand jobs for not only indigenes of Lokomasama and its immediate environs but for Portloko district and the country in general. The Vice President described Elite Agro Company as a blessing to Lokomasama chiefdom and Portloko District. He informed the people about the machines the Company will be bringing to embark on the rice production, as well as the assistance the community people will be receiving from the Company.
The Vice President stated that theRhombe Project by Elite Agro is as a result of the friendship between President Julius Maada Bio and the Crown Prince of the United Arab Emirates-His Royal Highness Sheik Mohamed Bin Zahir. Vice President Jalloh informed the people about President Bio’s expressing interest to focus on the development of agriculture and food self-sufficiency in Sierra Leone to the Crown Prince. He added that the Elite Agro Company is in Sierra Leone as a result of President Bio’s engagement with Prince Zahir. Dr. Jalloh noted that the vision of President Bio is to ensure that Sierra Leone does not purchase rice, he explained that the Government of Sierra Leone is spending over two hundred million United States Dollars to import rice alone. Vice President Jalloh said that the Government of Sierra Leone is paying one billion eight hundred million Leones as lease rent to land holding families for the fourteen thousand seven hundred hectares of land the company will be farming on.  He furthered stated that the company’s duty now is to start work by bringing machines, building factory to commence operation. Vice President Jalloh encouraged the community people to embrace, support and respect the Elite Agro Company to ensure the Company operates well. He maintained that support from the community will demonstrate that the people are happy for the Company to operate in their Community. The over fourteen thousand hectares of Rhombe swamp extends to Sarmu.
Dr. Abdul Munim Marzooqie who spoke on behalf of Elite Agro stated that the Company is operating in seven countries in the world. Dr. Marzooqie stated that with the support from the Government of Sierra Leone, the company will operate on a sustainable basis to produce rice that will serve the needs of Sierra Leoneans. He stated that the Company is not only in Sierra Leone to farm the Rhombe swamp but will provide seed to farmers in the immediate environs. Dr. Marzooqie assured the community people of providing farmers the opportunity to use their milling machine and mill their rice after harvest, as well as use the factory to bag their rice. Dr. Abubakar Karim- the Acting Minister of Agriculture stated that the project is part of President Bio’s initiative for foreign direct investment in rice cultivation. Dr. Karim explained that the Company is investing its own money directly into the agricultural project. He said that the rice produced by the Company will be affordable and cheaper with good quality, and the first initial target of the project is to ensure that Sierra Leone is self-sustainable with rice before exporting to other countries.

The Acting Minister of Agriculture noted that the Company will be harvesting two or three times annually. He explained that the Company will be producing twenty thousand (20,000) metric tons of rice per harvest, noting that 20,000 metric tons of rice is equivalent to eight hundred thousand (800,000) 50Kg bags of rice per each harvest. Dr. Karim expressed optimism that the mass production by the Company will limit the importation of rice that affects Government largely.
The Sierra Leone Ambassador to the United Arab Emirates-Rashid Dumbuya opined that the project is as a result of President Bio’s articulation of his vision for Sierra Leone with focus on agriculture to the Crown Prince of Abu Dhabi during his first visit. Ambassador Dumbuya informed the audience that the signing of the Agreement between the Government of Sierra Leone and Elite Agro Company on Monday 14th December, 2020 to farm the Rhombe swamp emanated from the discussion held between the two leaders. He concluded that the Company will focus on rice production and other high value commodities like tomatoes, onions, and maize.