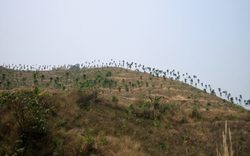 Large-scale land acquisitions repeatedly fall short of their acclaimed socioeconomic benefits and are associated with unintended social, economic, and ecological costs. In Laos, the government has started to question its own “Turning Land into Capital” policy, and reviews land acquisitions or concessions with regard to their socioeconomic impacts.

Consequently, land conversions caused by concessions resulted in net carbon emissions of 4.9 Mt CO2 e yr-1 on average in 2001–2017, which amounted to 34% of total emissions from land conversions. Even tree plantations that are meant to serve as net carbon sinks caused net emissions, but those data are the least robust.

The relatively low carbon emission intensity of shifting cultivation compared to the high carbon emission intensity of concessions challenges the dominant narrative of shifting cultivation as a causal factor for forest degradation. Political means of fostering sustainable development include the reduction of land acquisitions because of their emissions intensity, and minimization of emissions and social conflict induced by granted concessions, for example, by allocating land with low carbon densities and obtaining consent of local land users.