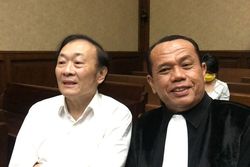 A tycoon once named one of Indonesia’s richest has gone on trial for alleged corruption estimated to have cost the state the equivalent of US$5.25 billion and caused major environmental damage from the destruction of vast amounts of virgin forest. If the charges are proven, the case would involve the largest state losses ever recorded in the country.

Surya Darmadi, the 71-year-old boss of PT Darmex Agro Group, a palm oil processing consortium, is charged with bribing government officials to make it easier to permit the expansion of its oil palm plantations. And, while these alleged losses are significant, the environmental damage to Indonesian forests as other oil palm producers have converted primary forest to plantations has been enormous, pushing the country into the top ranks of global fossil fuel emitters.

At least 30 large groups of national and multinational companies control Indonesia’s plantations, pushing their beneficial owners onto the country’s rich lists and opening the potential for fraud. The joint environmental organization Eyes on the Forest, in a detailed analysis of forest area in Riau, the Sumatra-island province directly across the Malacca Strait from Singapore, found that of 3.3 million hectares of ​​oil palm plantations, only 14 percent are legal. The remaining 86 percent don’t have right-of-exploitation permits, known by the Indonesian language initials HGU, and are located in protected forests, production forests, and conservation areas.

Indonesia Corruption Watch and Aidenvironment in 2015 found that illegal forest encroachment has long-term consequences related to changes in land use, conflicts between communities and investors, and the potential for damage to ecosystems in the forest. The potential loss to the state is also huge.

Founded in 1987, Darmex is one of the largest oil palm cultivation, production, and export companies in Indonesia with eight factories spread across Pekanbaru, Jambi, and Kalimantan. The five subsidiaries in the consortium produce 36,000 metric tons of crude palm oil every month, most of it reprocessed into derivative products such as cooking oil, noodles, and soap. In 2018, Surya was named by Forbes as the 28th richest person in Indonesia with an estimated wealth of US$48 billion.

The first of two cases relates to allegations that Surya had bribed the former Regent of Indragiri Hulu, Thamsir Rachman, to grant a forest management permit for an oil palm plantation covering ​​37,095 hectares in Riau Province. The Attorney General's Office, the agency currently handling the case estimates that misappropriation since 2003 until now has cost the state more than Rp78 trillion (US$5.243 billion). Surya and Thamsir have been named as suspects.

The second case relates to allegations that Surya paid former Riau Governor Annas Maamun Rp3 billion to smooth out a proposal to revise the conversion of forest functions to the Ministry of Forestry in 2014. In 2019, the Corruption Eradication Commission (KPK) issued a travel ban on Surya, who apparently promptly fled to Singapore.

He didn’t return until August 15, after the Attorney General's Office named him a suspect in the initial corruption and money laundering case. In previous attempts to coax him out of hiding, the attorney general confiscated Surya assets including 40 plots of land, six palm oil mills, six buildings, three apartments, two hotels in Bali, a helicopter unit, and trillions of rupiah in cash kept in an Indonesian bank account, with the total assets confiscated reaching Rp11.7 trillion (US$787.85 million). The Prosecutor's Office has also barred Surya's family from traveling abroad amid plans to continue holding the trial in absentia —a trial without the presence of the accused.

On September 8, the prosecutor said during the Jakarta trial that Surya, also known as Apeng, met with Indragiri RegentThamsir several times in 2003 to ask him to approve land clearing in the Indragiri Hulu area. Thamsir issued a business license, even though Surya didn’t have a forest area release permit from the Ministry of Forestry or HGU issued by the National Land Agency.

Surya was also charged with not bothering with other licensing documents such as environmental impact analysis, environmental management efforts, or environmental monitoring efforts. Prosecutors also said that Surya didn’t comply with regulations requiring companies to allocate at least 20 percent of plantation area under management to be managed by local farmers.

The alleged illegal land occupation resulted in state financial losses because the state did not get its rights in the form of income from payments from the reforestation fund, provision of forest resources, and leases for use of forest areas.

Apart from corruption, Surya was also charged with money laundering from the proceeds of corruption in his palm oil business of around Rp. 7.7 trillion to purchase land and buildings both domestically and abroad, carried out stock transactions, purchased ships, and transferred funds to his various subsidiaries. He was charged with corruption and money laundering, which carries a maximum sentence of life imprisonment, and the possibility of recovering state losses.

"I saw the numbers, I'm half crazy!" Surya said after the trial. "My hotel, property, boat, everything is blocked. They want to destroy my company!"

However, the Attorney General's Office said that the total state losses in the Surya case consisted of state financial losses of Rp4.7 trillion and US$7.8 million, and state economic losses of Rp73.9 trillion. The loss was calculated since the five Surya Group companies operated illegally over a span of 19 years from 2003 to 2022. The calculation involved the Financial and Development Supervisory Agency (BPKP), environmental experts, and economists from Gadjah Mada University.