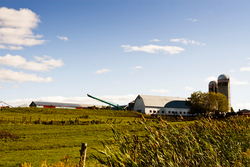 
Alberta MLA and Quebec MNA showing leadership on farmland ownership, says NFU
The National Farmers Union (NFU) applauds Athabasca-Barrhead-Westlock United Conservative MLA Glenn van Dijken for bringing forward Alberta’s Bill 206, the Prohibiting Ownership of Agricultural Lands (Pension Plans and Trust Corporations) Act, and Québec Solidaire agriculture critic, MNA Émilise Lessard-Therrien who brought forward Quebec’s Bill 991 An Act to combat agricultural land grabbing. Both private members’ bills were tabled in their respective provincial legislatures this spring and attempt to curb farmland grabbing by powerful financial actors.
Ever since the rise of investor farmland purchases following the 2008 financial-food-fuel crisis, the NFU has been sounding the alarm, standing in staunch resistance to the trend, and working to document it.
Bill 206 would ban pension funds from owning Alberta farmland. Globally, pension funds control USD$56 trillion, and are some of the primary actors turning communities’ lands, waters, and social services into financial assets while making them inaccessible or unaffordable to the people who need them.
While the effort to bar pension funds is a positive first step, we also need to put limits on other investors – wealthy individuals, hedge funds, and Real Estate Investment Trusts (REITS) –  that are driving farmland prices above the land’s productive value by purchasing farmland as a financial investment.
Quebec has legislation ensuring only Quebec residents and Quebec-owned corporations can own more than 4 hectares of farmland. With Bill 991, MNA Émilise Lessard-Therrien, proposes further limits on land grabbing by targeting private investment funds. Lessard-Therrien’s bill crucially limits not only direct purchase of farmland, but also “indirect” purchase, such as through ownership of shares of a corporation that buys farmland. However, Bill 991 seemingly would not limit public pension funds from purchasing farmland.
Bill 991 would also improve transparency by creating a public registry of agricultural land transactions. This would allow for a better-informed public dialogue about the future of farmland tenure. Although each province collects this type of data already, access to the information can be very limited. The NFU supports better public access to land titles data, particularly for public researchers. So far, only Saskatchewan has enabled researchers to use land titles data to develop a picture of investor farmland ownership and farmland concentration over time.
While many private members’ bills are never passed, the NFU hopes that Bills 206 and 991 will advance through their legislatures and spark further public debate. The fact they were brought forward reflects growing awareness and concern about the impacts of concentration of ownership by investment companies and institutions like pension funds. The NFU continues to push for laws and policy that will ensure the land can support farmer livelihoods, flourishing rural communities and healthy ecologies into the future.