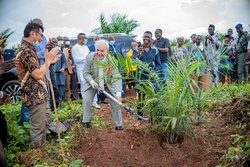 by Adibe Emenyonu in Benin
No fewer than 55 communities in four local government areas of Edo State yesterday protested the acquisition of the communities’ rainforest reserve and farmland by the state Governor, Mr. Godwin Obaseki, in spite of pending court cases on the matter.
Some of the impacted communities which protested include Odighi, Odiguetue, Uhiere, Owan, Agbanikaka, Orhua, Oke-Irhue, Ekhen-Irhue, Ago Oshodin, Ekpan, Ofumwegbe, Umokpe, Agudezi, Ozalla, and Igbira Camp.
Others are Uhonmora, Sabogidda-Ora, Avbiosi, Oke-Ora New, Oke-Ora Old, Avbiosi, Ukpujie, Eme-Ora, Agubezi, Ogbeturu, Ewei, Atoturu, Uzebba, Ogbetuo, Sobe, Olelo-Era, and others.
Addressing journalists at Uhonmora, Owan West Local Government Area of the state, Spokesman of the affected communities, Mr. Tony Erha, lamented that the governor was bent on ceding their land to his allies, regretting that the governor had acted defiantly to courts cases on the issue and other series of petitions written by the communities.
He said rather than suspend action on the “illegal acquisition” the governor had deployed bulldozers to destroy crops and other economic trees on their land. Erha also accused the governor of being insensitive through constant harassment and intimidation of the said communities with law enforcement agencies; police, civil defence and vigilante groups.
He stressed that the communities would not relent on the matter until the governor removed himself from their land.
“Today, the over 55 communities, supported by the Owan General Assembly, the Tabitha Women Prayers Group, a global charity with headquarters in Belgium and the United Kingdom, the Nature Conservation Observance of the United States of America and indigenes of our communities at home and in the diasporas, are intensely opposed to the movement of bulldozers by the Edo State Government (EDSG) and its proxy companies to our two remaining ancestral rainforest reserves of Owan BC 10 and luleha/Ora/Ozalla, respectively, consisting the Owan Forest Zone (OFZ).
“Governor Obaseki is insistent on grabbing, bulldozing and replacing our biodiversity rich forest lands and our crops with mono crop oil palm, for open grazing and mining, to Fayus Nigeria Ltd, Saturn Ltd, A & Hatman Limited and several other of his almighty business friends and owners of the local multinational companies.
“This means robbing our poor of the poor to pay his superbly rich associates.
“After months of arm twisting, blackmail and intimidation of our poor villagers with heavily armed policemen, soldiers, civil defence corps and other security men, the public machinery of the state has finally been deployed with the bringing of the bulldozers for the forced possession, cruel destruction of the forest biodiversity, our farmlands and livelihood.
“This is despite that our various communities and organisations had severally briefed and wrote petitions to the state government that its ceding of our remaining forest reserve land is an illegal act that would dispossess, impoverish and destroy our communities and people.
“Our youths particularly, depend on the land for farming and source of foods, logging, medicine, harvest of non timber forest products, ancestral worship, environmental replenishment and source of water.
“Obaseki and his company allies, with the bulldozing of our ancestral forest and crops, have ignored with impunity the court case already instituted.
“Sadly, the movement of bulldozers to the Ugbeturu, Etiose and Sobe axis of our community is provocative, misplaced, ill-timed and a barefaced excuse to kill and maim our people, should they object to the destruction of our community.