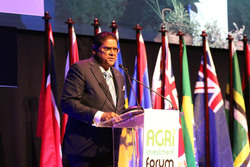 by Leah Sorias
As the Caribbean Community (Caricom) pushes ahead with its target of reducing its US$5 billion food import bill by 25 per cent by 2025, President of Suriname Chandrikapersad Santokhi yesterday announced that his country will make land available for agricultural production, fostering partnerships between Surinamese and other Caribbean producers and processors.
“And I’m taking this opportunity to invite the private sector to make use of this opportunity,” he said yesterday while addressing the opening of the Trinidad and Tobago Agri-Investment Forum and Expo II, held at the National Academy for the Performing Arts (NAPA), Port of Spain.
Santokhi, who is also chairman of Caricom, urged member states to join with Caricom “in these serious times” in moving the “25 by 2025” plan forward.
“I am pleased to note that international co-operation with many organisations worldwide, including USAID, in follow-up to the establishment of the Food Security Commission between the USA and Caricom, is taking place and that skills and capabilities are being developed,” he said.
“And in order to contribute and support this, Suriname will make land available for agriculture production...,” he announced.
Santokhi said Suriname has also committed to making ten hectares of land available for the establishment of an innovative campus, where students and start-ups from the region will be facilitated to conduct research and development studies and where government and the business community will invest in technological solutions that improve resource efficiency, increase resilience to climate change, unlock new ways to drive growth, realise operating efficiencies and mitigate risk.
“The campus should become an innovative hub for the region where experts from the region will also be attracted for knowledge sharing. The future of the region depends on the youth of today and tomorrow. Your involvement and support is going to be critical for the sustainable development in our region,” Santokhi said.
Press reset button
Santokhi emphasised that the need for a complete transformation and the realignment of the region’s food system was never before more urgent.
He said it required the region to press the reset button as it relates to agriculture finance, rural infrastructural development, climate smart agriculture, water management and use, agri technologies, cross-border investments, fisheries development, increased intra regional trade and food security.
Santokhi added that investment and financing were vital to the transformation of regional agriculture and must be pursued with “tremendous and urgent enthusiasm”.
He noted that the agribusiness sector in the Caribbean possessed immense potential and presented opportunities and significant advantages for the expansion of the intra-regional trade, foreign exchange earning savings, public private partnership, innovation and technology advancements.
“The region’s private sector has a US$4 billion to US$6 billion import bill and a business opportunity as well. Never before has there been such a ready opportunity for the creation of a new agro industry. To optimise these opportunities, we must build partnerships with the wider world, our own regional private sector and financial institutions,” he said.
“The excess liquidity throughout the region presents a golden opportunity for investors in agriculture,” Santokhi added.
Shovel-ready projects
Santokhi said Caricom member states have agreed to a priority list of commodities, including corn/soya production, poultry, table eggs, roots and tubers, meat, herbs and spices.
Caricom has started the analytical work and is now ready to roll out these investments with the private sector, he said.
“There are already successful outcomes since we announced the initiative,” he said.
Santokhi said member states had formulated, agreed and were implementing their strategies towards attaining the objectives and targets as set out for regional food and nutrition security under the 25 per cent by 2025 plan.
He said over 24 different shovel-ready projects were presented in Barbados and Guyana to prospective investors, with an accumulative value of over $150 million.
Santokhi stressed that Caricom’s ever-increasing food import bill, concerns over the impact of climate change on the agriculture industry and apprehension of another crisis or disaster event severely affecting our food security demanded a collective response.