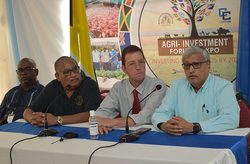 
DDL eyeing location in Moblissa for dairy farm operations
By Tamica Garnett
The Demerara Distillers Limited (DDL), in partnership with the LR Group of Israel, is currently considering a location at Moblissa, Soesdyke-Linden Highway, for the establishment of the much anticipated state-of-the-art dairy farm operations.
The operation is designed to supply DDL’s TOPCO milk plant with fresh cows’ milk for pasteurisation and packaging, and will produce over four million litres of fresh milk per year when operationalised.

The multi-million dollar project would require approximately 600 acres of land, create dozens of jobs and see the importation of 500 pregnant heifers to supply the milk production.

Speaking at a press conference held on Saturday at the Agri-Investment Forum and Expo at the Arthur Chung Conference Centre, representatives from DDL and the LR Group noted that the project has been facing some amount of challenges with sourcing suitable land for the location of the project.

“We have been working to identify the best possible location in Guyana. Once we have identified that location and we work with the [LR] Group to put the technical feasibility together, we will then move to the stage of the financial feasibility and then project implementation,” DDL Chairman Komal Samaroo explained, as he delivered remarks at the press briefing.

It was last June that DDL and LR Group signed a Memorandum of Understanding (MoU) to provide for collaboration in the development of the dairy farm, and embarked on a feasibility study for the establishment of the farming operation.

According to Samaroo, several locations have been assessed over the past year as possibilities for the proposed project, however, several factors are affecting the selection of a suitable location including the soil type, availability of utilities and availability of labour.

Once the land is identified, it is expected that the setting up of the farm should take within in two years to complete. The investors are ready to begin work on the land immediately once the land has been procured. The dairy production is part of the diversification of DDL’s TOPCO facilities.

“The best practices that the LR Group brings to the table and develop a very efficient dairy farm that could feed into our TOPCO packaging facility, supplying our domestic markets and we hope, eventually, the regional market,” Samaroo noted.

The project is seen as an important part of the national and regional food security mechanism currently taking centre focus in CARICOM. It will play a role in assisting to decrease the importation of dairy products and be part of CARICOM’s goal of 25 by 2025 (reducing the region’s food import bill from extra regional sources by 25 per cent by 2025).

“While we designed a facility to package juice, Guyana was importing most of its milk at a significant cost, so we decided to build in the features to be able to pack [the] milk and supply the domestic market. As an interim measure, we are reconstituting powdered milk but the goal has always been to integrate backwards into the domestic dairy sector,” Samaroo noted.

The dairy farm project will be utilizing a zero grazing system, which means that the animals would be enclosed in their shed in cooling environments, and not be grazed outdoors.

This system, Ofer explained, would enable the cows to save energy which they can use to alternatively increase their milk production.

“Instead of the cows grazing on the land, we will be taking part of the land usually used by cows and we will be doing some cultivation system for forage crops that will be served to the animals at the table in the shed.

“They don’t go out, they don’t waste any energy searching for food; all of their energy is for milk production. In this way, we can produce more milk from a smaller units of production,” Ofer noted.

Even as the company looks to enter the dairy market, it is still hoping to continuously expand its fruit juice production and further contribute to the reduction of food commodities in the Caribbean region from extra-regional sources.

“The needs that exist within our system for the procurement of fruit so we can incorporate those into our produces. Anyone who would like to get involved in the production of fruit we would encourage them to engage us before they embark on such a venture in that regard,” DDL Topco Managing Director, Persaud noted.