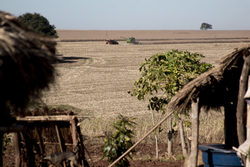 A monoculture plantation near a village in the Dourados-Amambaipeguá I Indigenous Territory in Brazil’s Mato Grosso do Sul state. (Photo by Ana Mendes)
Mongabay | 7 July 2022

Since March 22 this year, Brazil’s federal agency for land reform, known as Incra, has been looking into the registration of a sprawling ranch in the municipality of Fernando Falcão, in the northwestern state of Maranhão.

According to the federal government’s Land Management System, the 11,000-hectare (27,000-acre) ranch is the subject of a property dispute. One of the parties in the dispute, according to an Incra document seen by Mongabay, is seeking the “cancellation of the aforementioned area [ranch] as it overlaps my client’s property.”

The problem is that there shouldn’t be a dispute over the ranch — in fact, there shouldn’t even be a ranch there. All 11,000 hectares of the land in question falls inside the Porquinhos Indigenous Territory, home to the Apãnjekra Canela people, which has been in the process of official recognition by Funai, the federal agency for Indigenous affairs, for 22 years now.

Under previous Brazilian governments, the federal system would have automatically refused to register any property overlapping with an Indigenous territory. But on April 16, 2020, under the administration of President Jair Bolsonaro, Funai published what’s known as Normative Instruction 9. This allows large landowners to obtain federal property certificates for areas in any Indigenous territory that has not been officially recognized, or demarcated.

As a result of this regulation, on Dec. 10, 2021, the owners of the ranch inside the Apãnjekra Canela’s land obtained a certificate from the federal government.

The Funai regulation has impacted not just the Apãnjekra Canela but also 48 other Indigenous peoples whose lands have also been registered to private owners, according to a new report obtained by Mongabay. The report cross-referenced data from both Funai and Incra to reveal the potential loss of Indigenous lands in the past two years covering an area more than twice the size of the city of São Paulo.

The report was compiled by GeoPrecisa, a consultancy that specializes in the federal land certification and registration system. It shows that the Bolsonaro administration has approved the registration of more than 250,000 hectares (620,000 acres) of farms since April 2020 within Indigenous reserves that are still undergoing the demarcation process.

The effort to demarcate the Porquinhos Indigenous Territory in Maranhão has been challenged in court since 2009 by the municipalities in which the 221,000-hectare (546,000-acre) reserve lies: Barra do Corda, Fernando Falcão, Formosa da Serra Negra, and Mirador.

In 2014, the Supreme Federal Court (STF) suspended the official recognition process based on the so-called marco temporal criteria: a controversial cutoff policy that states that Indigenous peoples are only entitled to claim lands they occupied at the time the 1988 Constitution came into effect. Apãnjekra Canela leaders made the long journey from their reserve to the court justices’ offices in Brasília in 2019 to press their case, but were unable to lift the suspension of the demarcation process.

At the same time, outsiders have continued encroaching into the reserve, with the pace of invasions increasing after the issuance of Normative Instruction 9. In the two years since the regulation came out, the government certified and registered more than 69,000 hectares (170,000 acres) of farms inside the Porquinhos Indigenous Territory, according to data from Incra. Porquinhos was the Indigenous territory most affected by the Funai regulation throughout Brazil during that period.

The state has become ground zero for Normative Instruction 9. According to the GeoPrecisa report, eight of the 10 largest estates in Brazil benefiting from the regulation are located in Maranhão, which straddles the Cerrado and Amazon biomes. The state is also one of the fastest-expanding fronts of the soy industry, where land grabbers, multinational companies and agribusinesses are seeking to wrest land away from traditional communities and Indigenous peoples.

“In practice, the government is saying that these areas are not Indigenous lands,” says Rafael Modesto, a legal adviser with the Indigenist Missionary Council (CIMI). An Indigenous rights advocacy group affiliated with the Catholic Church, CIMI is also one of the organizations that has consistently opposed Normative Instruction 9 since it was announced.

“The government has created a problem for itself, because it will have to remove the intruders, which is always a battle,” Modesto says.

He notes that a federal court suspended the normative instruction in Maranhão but stopped short of annulling the certifications and registrations that had been granted so far. “Unfortunately, this has been happening in courts across Brazil: they suspend the regulation but not its practical effects,” he says.

Judges as landowners in Mato Grosso do Sul

Mongabay has previous reported on how Normative Instruction 9 was expected to undermine Indigenous peoples’ fight for their lands in Mato Grosso do Sul state. Two years on, the data from Funai and Incra confirm the advance of intruders there.

Since the regulation was issued, the federal government has approved the registration of more than 58,000 hectares (143,00 acres) of farms located in areas Indigenous lands still undergoing demarcation in Mato Grosso do Sul. The policy has affected 20 of the 26 Indigenous lands in the state that have not yet been demarcated.

Lying across the municipalities of Amambaí, Caarapó and Laguna Carapã, Dourados-Amambaipeguá I is one of the most affected Indigenous territories. Outsiders there have obtained government certificates and ownership registrations to more than 12,000 hectares (30,000 acres) of land inside the reserve, which is home to the Guarani Kaiowá people. That represents more than a fifth of the reserve’s 56,000 hectares (138,000 acres). The reserve is located close to Brazil’s border with Paraguay, in the area known as Mato Grosso do Sul’s southern cone, notorious for its high rate of violence against indigenous people.

“Unfortunately, Mato Grosso do Sul is characterized by strong agribusiness together with conservatism, something that influences the courts,” says CIMI’s Modesto. “Some judges are large landowners themselves, which interferes with their rulings.”

The Federal Prosecution Service (MPF) has filed at least three requests in court to suspend Funai’s normative instruction in the state. While those requests were initially accepted, the decisions were subsequently overturned by higher courts, including the Federal Regional Court in Mato Grosso do Sul.

“There is strong rejection of the Indigenous agenda in the state,” says Ricardo Pael, a prosecutor with the MPF’s unit for Indigenous peoples’ rights. In Mato Grosso do Sul, he says, incidents abound of “Indigenous people displaced [from their lands] by rural militias and how they often go to police stations to report it but end up investigated — rather than being treated as victims.”

In practice, the regulation has allowed farmers, illegal miners and land grabbers to invade Indigenous lands and register the properties to themselves, including in areas whose use is restricted by Funai in order to locate and protect uncontacted Indigenous peoples.

“Normative Instruction 9, associated with the [Bolsonaro] administration’s campaign rhetoric of ‘not demarcating even an inch of Indigenous land’ and ‘reviewing official recognitions,’ resulted in an increase [of invasions] even in states with regularized territories, such as Mato Grosso, Pará, Roraima,” says Pael, the prosecutor.

“Many invaders expect that the territories will no longer be Indigenous,” he adds, warning of indirect impacts, including legal uncertainty for “banks and the rural real estate market” that underwrite these properties.

“For example, banks are at risk when they offer loans to borrowers that use the properties [obtained through Normative Instruction 9] as collateral — and they can do so without knowing that it will be recognized as Indigenous land,” Pael says.

The Federal Prosecution Service says Normative Instruction 9 “favors illegal occupation of public lands and exacerbates land conflicts,” in addition to “violating Indigenous peoples’ constitutional rights.” Prosecutors have filed more than 25 lawsuits against the regulation, but as of this writing, only eight states have banned its use.