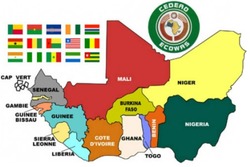 
ECOWAS asked to put in place a moratorium on new land-based concessions for industrial plantations
By Henry Karmo
Monrovia — A regional civil society group "Friends of the Earth Africa" has launched a campaign intended to urge ECOWAS to put in place a moratorium on new land-based concessions for industrial plantations.
Their struggle, according to Rita Uwaka, is against the corporate takeover of forests in Africa. According to Uwaka, land for industrial plantation expansion by corporations is not a fight against development but a struggle to prevent further human rights violations, environmental damage, and biodiversity and livelihood loss.
It is also about promoting the development of millions of indigenous people and local communities, with a focus on women and youths, who depend on forests and farmlands for their day-to-day well-being.
Ms. Rita Uwaka is theCoordinator, of Forest & Biodiversity Programme, Friends of the Earth Africa (FoE Africa). She also said, the first African Peoples Tribunal on Industrial Plantations organized by Friends of the Earth Nigeria (FoEA), which featured ten (10) cases of violations across 10 countries in Africa was a turning point for affected local communities and civil society in Africa to build collective solidarity against corporate capture of their land and forests by Agro commodities Company.
"It called upon governments to hold national and international companies and financiers accountable for the impacts of their plantations and to provide access to justice for affected communities and environmental human rights defenders.
"Impacts of industrial plantations include deforestation, land grabs, workers' rights violations, and violence, harassment of environmental human rights defenders and loss of livelihoods. The key economic sectors responsible for those harms are timber, oil palm, rubber, eucalyptus and cocoa."
Amongst many recommendation, the Civil Society group is recommending, that the ECOWAS Support Economic Partnership Agreements that respects the rights of local communities and indigenous peoples in Africa and protect and restore the environment.
They are also asking ECOWAS to build policies and finance that promote people powered solutions like Community Forest Management & Agroecology, that are built on peoples sovereignty and participation in decision making.
"Reject false solutions such as voluntary certification schemes and nature based solutions for the climate crisis that commodify nature green wash bad practices, license forest destruction and violate human rights.
"Halt the criminalization and harassment of environmental human rights defenders and provide access to justice for defenders and affected local communities. Support policies that install a moratorium on the expansion of monoculture industrial plantations."
Friends of the Earth also believe Redirecting investments from large-scale agro commodities expansion in Africa by shifting government and private finance, research, and technical support towards community-based forest management and agro ecology is the best way.