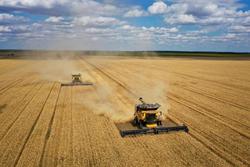 
Romanian farming group plans to raise EUR 10.7 mln from investors to accelerate expansion
by Andrei Chirileasa
Holde Agri Invest, a Romanian farming group that has developed by drawing money from the capital market and buying farms in the country’s southern region, aims to raise RON 52.8 mln (EUR 10.7 mln) in its biggest capital increase to date.
The group plans to use about two-thirds the money to buy more farms in Teleorman, Giurgiu, Calarasi and Ialomita counties and possibly expand to Olt and Constanta counties. The remaining funds will go into modernizing the newly acquired farms to increase their productivity and the group’s profitability.
The share capital increase, which takes place through the Bucharest Stock Exchange, will have two stages. In the first one, between June 24 and July 24, the company aims to raise money from existing shareholders or preference rights owners. An investor needs about 1.82 preference rights to subscribe a new share at the price of RON 1.65, which is close to the current trading price of the HAI shares on the ArRO market (RON 1.665 as of June 20).
In the next stage, the shares that remain unsubscribed by the preference rights holders will be sold through a private placement.
The company is not at its first attempt to raise money through the Bucharest Stock Exchange. In 2021, Holde Agri Invest raised RON 29.37 mln (EUR 5.95 mln) through a similar capital increase. Shortly after that, it announced it would acquire four new farms with a total 3,500 hectares of land for an estimated EUR 6.7 mln.
It has already used part of that money to buy new farms and expand its three farming hubs located in Videle, Rosiorii de Vede and Frumusani to almost 10,000 hectares. It also announced the acquisition of another 2,100-hectare farm in Contesti, Dambovita country, in a deal worth RON 10.25 mln (EUR 2.07 mln).
In 2021, Holde Agri Invest recorded operating revenues of RON 62.8 mln (EUR 12.76 mln), up 54% compared with the previous year, and almost doubled its net profit to RON 6.7 mln (EUR 1.36 mln). More details about the group's operations are available in the 2021 annual report.
The HAI shares have brought investors an average return of 27.4% in the last 12 months (as of June 20, 2022). The group currently has a market capitalization of RON 120 mln (EUR 24.3 mln).