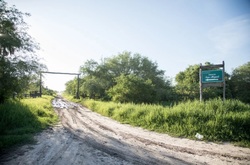 Earthsight’s Grand Theft Chaco series has exposed the links between illegal deforestation for cattle ranching in the Paraguayan Chaco and leather used by car giants in Europe. At the heart of the investigation is PNCAT, the protected land belonging to the Ayoreo Totobiegosode people, including some of the last uncontacted groups in the world. The entire Chaco ecosystem – home to jaguars and giant anteaters – is under intense attack by ranchers and soy growers and is fast losing its native forests and rich biodiversity.

Our research found that two ranches within PNCAT – Caucasian SA and Cooperativa Chortitzer –illegally cleared over 2,700 and 500 hectares of forests respectively between 2018 and 2019 in contravention of government resolutions. A third farm, Yaguareté Porã, has a long history of illegal land dealings and pasture development within PNCAT dating back nearly 20 years.

Earthsight was able to link hides from PNCAT to Italian automotive leather giant Conceria Pasubio and on to BMW and Jaguar Land Rover. Other car firms were discovered to be sourcing leather from the Italian tanneries implicated in the scandal, including Volkswagen, Stellantis (former Groupe PSA), and Ford.

Grand Theft Chaco II prompted the Paraguayan Senate to formally ask the country’s forest agency, Infona, and environment ministry (Mades) if they had taken any action to investigate and address the illegal clearances identified by Earthsight.

After analysing Infona’s and Mades’ responses to the Senate, as well as additional documents obtained under freedom of information requests, Earthsight and Paraguayan media outlet El Surtidor can reveal for the first time the actions, inactions and omissions at the heart of the Paraguayan government’s response, or lack thereof, to the illegalities uncovered by Earthsight.

They show that while action has belatedly begun to tackle illegal deforestation at PNCAT, the government remains a deeply unreliable partner in improving transparency and accountability for global supply chains reaching back to the country’s farms. Authorities only started moving more decisively against two ranches illegally destroying PNCAT following Earthsight’s and its partners’ exposés and calls for action.

We know from the whistleblowers Earthsight has spoken to that there is corruption within the relevant agencies in Paraguay. But what is about to be revealed below goes deeper. It isn’t about individual officials taking kickbacks. It indicates a much broader culture of impunity that spans the entire government, and which comes from the top.

Karen Colman, a former Mades official pushed out of the ministry for challenging a prevailing culture of favouring the interests of Paraguay’s landowning class above environmental law, said of the recent evidence: “This is further proof that the Paraguayan government is so tangled up with the cattle industry that it is willing to ignore violations of its own laws and turn a blind eye to habitat loss and the displacement of entire communities.”

This is yet more reason for consumer markets to be vigilant and speedily approve ambitious laws to cut their ties to illegal and unsustainable agribusiness abroad.

What the government documents reveal

The most glaring revelation from Infona’s documents seen by Earthsight and El Surtidor is that the agency knew all along of Caucasian’s and Chortitzer’s illegal deforestation but did little to put a stop to it.

As early as 2017 Infona had gathered evidence of Caucasian’s disrespect for environmental laws. In fact, in March that year the agency suspended the ranch’s land use plan (PUT) at PNCAT following illegal clearances of over 3,000 hectares (ha) during the previous six months.

Between 2017 and early 2020, Caucasian continued to clear hundreds of hectares of forests every year in complete contravention of its suspended PUT. As early as February 2018 Infona knew of at least 3,000 of a total of 6,000ha of further deforestation that took place during this period. That same year, and despite its repeated offences, Caucasian had the gall to submit a new environmental impact assessment to Infona and Mades for approval of a new PUT. Astonishingly, neither body thought to cancel Caucasian’s plan right there and then and refer the company to prosecutors.

Instead, the firm was allowed to continue to illegally clear land within PNCAT. In 2020 Mades went as far as approving Caucasian’s audit and environmental management plan related to the 2018 submission, a decision it would reverse in 2021 once the absurdity of the situation became too glaring to ignore (and once Infona questioned Mades about its decision). It’s important to note that this reversal also followed Earthsight’s first exposé in September 2020 and the January 2021 public letter organised by Earthsight and signed by several organisations calling on authorities to take action.

Mades’ 2020 decision is made all the more troubling considering the ministry knew of the Inter-American Commission of Human Rights’ (IACHR) precautionary measures issued in 2016 calling on the government to protect PNCAT from further land clearances. In fact, an Infona analyst drew attention to these measures, as well as the government’s own resolutions on the protection of PNCAT, to recommend the agency reject Caucasian’s plan. Sadly, this recommendation only came in January 2021, more than two years after the firm’s submission and after Mades had already approved its audit. The analyst’s recommendation highlighted another worrying revelation: in approving Caucasian’s audit in 2020 Mades falsely stated the farm did not affect protected areas or indigenous communities.

Following the IACHR’s measures, the government had participated in roundtables with the Ayoreo Totobiegosode to find solutions to protecting their lands and titling them to the indigenous people. It is striking that Mades would have approved a plan while the government of which it’s a part had a formal process in place to stop further destruction of PNCAT (although the Ayoreo have been vocal about the utter failure of this process to lead to any meaningful results, even pulling out of it in October 2021 in protest).

Infona’s documents show that some of its officials were in no doubt about Caucasian’s conduct. Several of them concluded that the ranch “repeatedly breached forest rules” and that it acted “without consideration for the fact [the farm] was within the core area of an indigenous community’s land”. They also concluded Caucasian was fully aware it was violating environmental laws.

Yet it was not until October 2021 that the agency finally cancelled Caucasian’s PUT and recommended criminal investigations against the firm. Note that this is the same month that the Ayoreo withdrew from dialogue with the government, which may have led authorities to fear renewed enquiries by the IACHR, thus prompting some action.

When it comes to Chortitzer things get even murkier. The reasons why are not hard to surmise.

Again, Infona had knowledge of Chortitzer’s wrongdoing from an early stage. In February 2018 it suspended the ranch’s PUT following illegal clearances, although the agency’s documents are unclear about the extent of the deforestation identified by its officials. Nonetheless, it was not until nearly three years later, in January 2022, that Infona finally recommended the cancellation of Chortitzer’s plan following further illegal clearances of 526ha between 2018 and 2020 at PNCAT.

Mades was equally eager to cultivate a relationship with Chortitzer’s leather exporting arm, Cencoprod. In October 2019, Paraguay’s environment minister visited the company to learn more about its activities.

These figures show Caucasian’s and Chortitzer’s illegal acts are on a far greater scale than those initially exposed by Earthsight. This makes Infona’s and Mades’ subdued – or downright reckless – attitude to these illegal practices even more baffling.

Earthsight and El Surtidor were not able to confirm whether any criminal prosecution against Caucasian has started or if Chortitzer’s PUT at PNCAT has been cancelled.

The evidence presented above is of great significance to foreign buyers of Cencoprod’s leather. The country’s largest leather exporter, Cencoprod was founded by three Mennonite cooperatives operating in the Chaco as a means to channel their cow hides to market. Among these cooperatives is Chortitzer. As such, Cencoprod is intrinsically and unavoidably linked to Chortitzer’s hides, including the ones originating from the cooperative’s land at PNCAT.

It’s now clear beyond doubt that the Paraguayan government itself acknowledges Chortitzer’s wrongdoing at PNCAT, even though it has failed to respond accordingly. It is thus very hard for Cencoprod, or anyone, to claim that its supply chains are not tainted by illegal deforestation.

But Infona also obtained evidence of further deforestation. Overall, it seems the forest agency has detected more than 9,000ha in illegal clearances carried out by Caucasian between late 2016 and late 2020. It appears Infona has opened separate cases for different episodes of deforestation at the firm’s PNCAT ranch, making it harder to establish the precise extent of clearances. As stated above, it’s not clear what deforestation Infona found at Chortitzer up to 2018.

This conclusion makes a mockery of Pasubio’s response to the findings of Grand Theft Chaco. Instead of investigating Earthsight’s allegations the Italian tannery – which has continued to buy leather from exporters with links to PNCAT – sought assurances from Paraguay’s ministry of industry and trade (not a ministry tasked with environmental or indigenous rights protection) that the country’s leather was clean. Unsurprisingly, the ministry was more than ready to provide such assurances, which led Pasubio to conclude it could not “question the government of a country that guarantees [legality].”

In light of these latest revelations, all users of Cencoprod leather, whether in Europe or elsewhere, might be expected to reassess their commercial ties to the Paraguayan exporter. But it is questionable whether this will happen. Pasubio’s reaction to the earlier evidence (not to mention BMW’s) speaks volumes about the leather industry’s willingness to carry the cost of meaningful action to clean up its supply chains.

It seems clear that the authorities in charge of protecting PNCAT ultimately failed in their duty to speedily halt further destruction of the indigenous land once they knew what was going on. After years of relative inaction, it was only following the Ayoreo Totobiegosode’s persistent struggle and civil society exposés that Infona started to take more meaningful measures. Mades would provide an even more belated response.

Not only did the agency and ministry fail to respond in a timely and appropriate manner to the ongoing destruction of Ayoreo lands, but they also neglected to be more transparent about the situation. The documents seen by Earthsight and El Surtidor show that Infona had knowledge of our public letter since early 2021. Even once the authorities were forced to take some belated action, they sought to do so as quietly as possible.

Instead of being tough on and transparent about illegal practices in the agribusiness sector, various government bodies were busy either signing cooperation agreements with guilty ranches or issuing baseless assurances to foreign buyers.

It’s not surprising that, when speaking to Earthsight last year, Julio Duarte, a lawyer representing the Ayoreo Totobiegosode, said the Paraguayan government had done “absolutely nothing” to comply with the IACHR’s measures.

The way the government has apparently dealt with fire alerts within PNCAT provides further proof of its inability to protect the land from illegal activity. Infona’s and Mades’ responses to the Senate show they have not made progress investigating fires, a situation that had already been highlighted by Earthsight and El Surtidor on separate occasions.