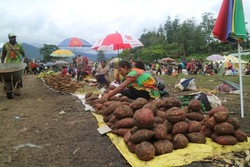 Papua New Guinea’s Constitution is unique as it gives the people rights to be custodians over their land, 95% of which is still under customary control.  For thousands of years, over 800 cultures have allowed our land to sustain every generation till the idea of registering customary land was introduced from outside our shores and clouded the real value and importance of that land.

Foreign investors and donor governments have influenced government and policy think tanks to orchestrate the mainstream mindset of most Papua New Guineans to falsely believe that registering land will relieve poverty and unlock development constraints.

This mindset has crucified customary land by opening a door to different land-grabbing schemes that poorly benefit our society.

The government keeps on coming up with policies and new ideas aimed at ‘unlocking’ customary land under the pretense they will improve the economy but have any of these schemes benefited the custodians of land?

Widespread human rights abuses have been reported by both international and national human rights observers on land and forest across PNG, but little is done because these land grab schemes are legally endorsed.

When will be the time when policies and ideas are centered on helping the population in rural areas to utilize their land for themselves and not hand it over to foreigners to exploit for their own profit?

Why should the people register land in return for false promises of money and improved infrastructure when they can be upskilled to utilize their land to increase their incomes in a sustainable and long-lasting manner? Why can’t the government and policymakers create policies that utilize the rural population to untap the huge potential of their land?

The way forward to improve the lives of people in PNG is NOT to alienate their rights to land and destroy the way of life that is attached to this relationship. At the heart of development and economic policy must be the needs and self-determination of local people. Any development policies that see dispossession of land as a necessary and unavoidable process are fundamentally opposed to the rights of the people and the preservation of our unique culture.

Studies into rural livelihoods over the past decade show that customary land is highly productive, but its output and impact is neither measured properly nor publicly recognized.

“If a rural family had to buy at regional markets what comes from their gardens, they would have to spend up to 20,000 Kina per year. That gives us an idea of the real value of subsistence output (what we produce to feed ourselves). The value of domestic informal or market trading, including garden produce, is almost the same again, another K20,000 a year.

Another example of this untapped value can be seen in the recent comments by the Fresh Produce Development Agency on the value of the horticulture sector. It is already a K3 billion a year industry but is trapped by a lack of skills, training, government support, and clear guidelines to untap this green mine.

Customary land is the most valuable asset available to most Papua New Guineans but its role and importance is often misunderstood or misrepresented, particularly by outsiders.

All of the government’s so-called ‘land reforms’ and development policies will continue to amount to nothing while they fail to recognize and support the potential of the custodians of the land to protect it and use it for maximum gain.

Having a government that fails to recognize this is a failure to the people.