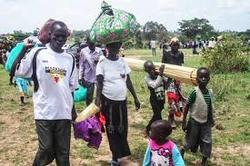 35,000 evicted residents in Kiryandongo district face starvation
Families are living on one meal a day. File Photo
More than 35,000 people who were evicted from their land in Kiryandongo district are on the verge of starvation.
The victims mainly women, children, and the elderly from ten villages were evicted in 2020 from their land measuring approximately 9,300 acres. The residents have been feuding with three companies who are also claiming ownership of the land and are alleged to have fraudulently acquired land titles.
The companies are Kiryandongo Sugar Limited, Agilis Partners Limited, and Great seasons SMC limited. They have set up various investments on the land including sugarcane growing, soya beans, sunflower, maize, and coffee farming respectively.
The residents who had been settling on the land for generations have since dragged the three companies to Masindi High Court for illegal eviction.
Harriet Mbabazi, 60, who has settled on the land since her childhood says that life has not been the same. She says her family now depends on one meal a day and sometimes sleeps on an empty stomach. She wants the government to compel the companies to compensate them for the damages caused.
Joseph Walekula, 50 says the investors have blocked them from planting crops on the land. He adds that access to water, schools, and health services has equally become difficult to access.
Peninah Kansiime, a mother of 7 says women are struggling to fend for their families. She says all her children have been forced to drop out of school since she doesn’t have money to pay school fees.
Pascal Bataringaya, 60 says her semi-permanent house was demolished and his crops destroyed during the eviction.
Wilson Tugume, the Kiryandongo sub county LC3 chairperson says the current situation is beyond their control. He has however faulted some district leaders and some members of the district security committee for allegedly conniving with the investors to forcefully grab land and evict people.
Patrick Manyuru, the Muntunda sub county LC3 chairperson wants the government to intervene and save the lives of the people.
Emmanuel Onyango, the Public Relations Officer for Agilis Partners says they genuinely acquired the land and gave people enough time to vacate in vain.
Geoffrey Wokulira Ssebaggala, the Country Director of Witness Radio says it is unfortunate that the people were evicted without being compensated by the companies.