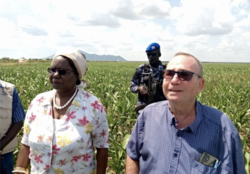 
Green Horizon announces new start
By Wek Atak Kacjang
Green Horizon on Thursday announced the start of a new variety for 2021 to improve food security in the country. The program is also aimed to improve the livelihoods through training of local farmers in producing enough food for both local and international markets.
The Minister of Agriculture and Food Security, Josephine Lagu and Green Horizon team led by General Manager Ran Dvirtook the trip to Jebel Ladu based farm to witness the official launchingof the new variety.
Speaking to the media, the Minister Lagusaid that the Investment in the agricultural sector was the only way to ensure the essence of food security in the country for domestic consumption was maintained.
“I am happy with the effort that has been put up byGreen Horizon farm since our relations arevery strong. So far Green Horizon has responded to our demand with report in every three months on how the farm is doing,” she said.
She added that Green Horizon was a government project implemented by Israelites to help alleviate poverty and improve livelihoods through training of local farmers to produce food for both local and international markets.
Lagu revealed that her Ministry had ensured that the project had been allocated more than 500 hectares of land in Jebel Ladu, 37 kilo-meters to improve food security in the country.
Meanwhile, Green Horizon General Manager Ran Dvir said that the project involved andworked together with the local community who had participated in the land allocation to improve food security for now and in the future .
“We are waiting for two more weeksto combine harvesting. Next we are going to plan more variety to make good crop because Green Horizon has trained local communities on how to use these modern tools, tractors, pests spraying tools and irrigation tools plus more others,” said Dvir.
He added that the training was to empower local farmers and enhance food security and develop agricultural sector through large scale production for commercial purposes in the country.Green Horizon has four tonhectares of rice which was big achievement as staff are well trained. Currently Green Horizon has more than 100 employees in four farms which were well managed.
Green Horizon has modern farms in Juba and Jebel Ladu in Central Equatoria State, Bor in Jonglei State, Renk in Upper Nile, and Torit, Eastern Equatoria State.It also has Community Commercial Farming Projects in Wau, Gok and Rumbek towns.