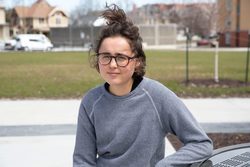 Hannah Zadeh, future COGS president, poses for a portrait outside Van Allen at the University of Iowa on Monday, April 11, 2022.
Daily Iowan | 12 April 2022


COGS sends petition urging TIAA to divest funds from fossil fuels
by Anthony Neri
The University of Iowa Campaign to Organize Graduate Students joined the campaign “TIAA Divest,” and sent a petition on April 6 asking the Teachers Insurance and Annuity Association to pull billions out of carbon-emitting investments.
The campaign is composed of various universities demanding TIAA divest billions from oil, coal, and fracked gas and to stop its acquisition of farm and timberland around the world by 2025.
Hannah Zadeh, chair of COGS’ political action committee and upcoming president of the union, said many UI faculty and staff members invest in their retirement through TIAA and, consequently, the university needs to counter the association’s “climate degradation.”
COGS filed the petition with its local TIAA office in Coralville and to the university to demand they put pressure on the corporation they work with frequently, Zadeh said.
The UI or TIAA has not yet responded to COGS, Zadeh said.
“Because TIAA is something that a lot of people at this university are using to invest in their futures, that money is going to fund these activities that are destroying our climate and the world that we all are living in together,” Zadeh said.
Jeneane Beck, assistant vice president for UI external relations, wrote in an email to the DI that the university is committed to offering multiple options to provide “choice, diversification, and socially responsible investment” to eligible employees, which includes TIAA options.
“The university is aware of concerns about TIAA’s involvement with Brazilian farmland investments associated with land acquisition, transparency and deforestation,” she wrote. “University Human Resources continues to engage in discussions with TIAA and will ensure university plan participants have access to information regarding their optional investments.”
The petition states that “the company has been linked to land grabbers in Brazil, and its land acquisitions in the U.S. have accelerated the corporate control over farmland, threatening family farms, and extracting land from Black farmers, communities of color and Indigenous Peoples.”
Laura Graham, UI anthropology professor, was the first at the university to bring attention to TIAA’s investments in oil, fracking, and coal in 2017.
Graham said she believes TIAA will not take its clients’ environmental concerns seriously unless they directly speak out.
“The divest campaign will certainly get their attention and has the potential to be effective, as the South Africa divest campaign was,” Graham wrote in an email on April 11 to The Daily Iowan.
The campaign against TIAA’s investments began when farmers approached faculty at the University of Wisconsin, Graham said, leading to certain resolutions. Graham previously wrote an opinion piece for the DI requesting TIAA be transparent about its farmland acquisitions and stop its “socially irresponsible farming pension fund investments.”
TIAA did not respond to a request for comment from the DI.
The UI’s mandatory retirement plan offers choice between Iowa Public Employees Retirement System and TIAA.
Following the Wisconsin initiative in July 2021, the UI passed a joint faculty and staff resolution focused exclusively on TIAA’s financialization of the farmland sector.
The UI Faculty Senate’s campaign has expanded in scope in recent months, calling for divestments from fossil fuels.
“Climate change is the most serious issue humanity and those who share the planet with us face at the present time,” Graham wrote. “It makes me proud to be part of the UIowa community that is taking a firm stand to hold TIAA accountable for socially and environmentally responsible use of our retirement funds.”