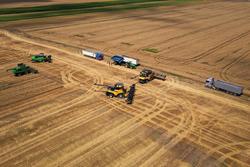 
Holde Agri Invest acquires 2,100-hectare farm in southern Romania
by Irina Marica
Holde Agri Invest, a Romanian company operating farmland, announced on April 11 that it completed the acquisition of a new farm in Dambovita county, southern Romania. The farm in Contesti commune has an area of 2,100 ha of land and is the fourth core farm of Holde, after Rosiori, Videle, and Frumusani.
Following this new deal, the group reached a total cultivated area of almost 12,000 hectares.
“In the agricultural year 2021-2022, we plan to cultivate on the Contesti farm crops such as wheat (395 ha), rapeseed (320 ha), sunflower (350 ha), corn (415 ha), and barley (620 ha),” said Liviu Zagan, CEO of Holde Agri Invest.
The value of the transaction is RON 10.25 million (over EUR 2 million), of which Holde will effectively pay RON 250,000. “The remaining RON 10 million represent liabilities that Holde will take over, the objective being that they will be significantly reduced in the next four years, based on a turnaround program planned by the group. The lands within the farm are leased and well merged, this being one of the main reasons for making the acquisition,” the company explained.
In 2021, Holde Agri Invest carried out an investment program of approximately RON 53 million, financed from its own and borrowed sources, respectively bank loans and financial leasing contracts. Investments in technological equipment and the purchase of farms, implicitly expanding the operated land area, were the investment program's main pillars.
Last year, Holde completed the acquisition of the Videle core farm, of approximately 2,400 ha, and made new acquisitions by taking over the companies Interprest Agrotex and Agro Fields Future. Through Interprest, around 400 ha have been added to the Rosiori core farm, which currently has a total area of approximately 3,650 ha. Through the acquisition of Agro Fields Future, the area of the Frumusani core farm was extended by 250 ha. It currently has a total area of approximately 3,650 ha.
Holde Agri Invest shares are listed on the AeRO market of the Bucharest Stock Exchange as of October 1, 2020, and are traded under the HAI stock symbol. The company has a market capitalization of over RON 100 million, and as of October 11, 2021, HAI shares are included in the BET-AeRO index developed by BVB for the AeRO market. In this index, Holde holds the second largest share.