Fate of mine, plantation concessions revoked by Indonesia to be finalized soon 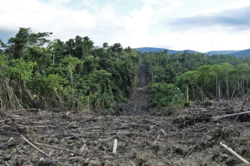 A road made by a palm oil company by clearing the forest in Jayapura Regency, Papua. (Photo: Asrida Elisabeth/ Mongabay Indonesia)
Mongabay | 7 March 2022


Fate of mine, plantation concessions revoked by Indonesia to be finalized soon
by Hans Nicholas Jong
JAKARTA — The Indonesian government says it will finalize this month the revocation of hundreds of permits for logging, plantations and mines that it announced at the start of the year, following widespread confusion and uncertainty over the unilateral move.
President Joko Widodo, who announced the revocations on Jan. 6, has established a task force led by several ministers who will be responsible for evaluating how the affected permit holders used their concessions and how those concessions will be used following the revocation.
The task force held its first meeting on Feb. 18, where it decided that all of the permits slated to be revoked will be rescinded by the end of March, according to Siti Nurbaya Bakar, the minister of environment and forestry. She said in a press release that there should be weekly announcements of which permits are being revoked.
The government’s unilateral decision to revoke the permits — not on any environmental concerns, but instead because the concession holders were deemed to be moving too slowly in exploiting natural resources — has spawned uncertainty that leaves the government open to a wave of lawsuits.
The task force aims to clarify the process, including by setting up a desk where concession holders can dispute the grounds for having their permits revoked. For each concession in question, the government will issue a decree that either finalizes the revocation, or else prescribes measures that should be taken to speed up its exploitation.
“The position [of the government] is to facilitate negotiation of all interests,” Siti said at a Jan. 25 parliamentary hearing. “So [the government] doesn’t mean to make life difficult for companies, but [they] can’t make life difficult for the public and the government as well. That’s why [we] need the clarification desk.”
Room for corruption
The affected concessions include environment ministry permits for 192 logging, plantation, mining and ecotourism operations, totaling 3.13 million hectares (7.73 million acres); 36 land ministry permits for plantations (34,448 hectares, or 85,123 acres); and 2,343 energy ministry permits for mines. So far, only the environment ministry has released the names of the companies affected, including many in the palm oil sector.
Hariadi Kartodihardjo, a lecturer in forestry policy at the Bogor Institute of Agriculture (IPB), who has advised the environment ministry on the matter, said the clarification process has already started.
“Some companies have given clarification to the environment ministry,” he said during a recent online seminar. “The ministry then set up a team led by its secretary-general [to handle] complaints.”
Syahrul Fitra, a forest campaigner at Greenpeace Indonesia, said it’s crucial for the verification and clarification process to be done in a transparent manner to prevent any room for corruption. He said the abrupt and one-sided nature of the revocation announcement, without any warning issued beforehand, means companies will almost certainly dispute the move.
“Companies will send a letter and they will meet [with the environment ministry]. It’s hard to not assume that there’s going to be [room for] a transaction [if] there’s no transparency to avoid conflict of interest and corruption,” Syahrul said.
And while the process plays out, it’s likely the concession holders will continue operating as usual on the ground, Hariadi said. “It’s reasonable to expect, because [the permit revocation] is not binding yet,” he said.
In Papua, a palm oil company called PT Permata Nusa Mandiri (PNM) began to clear more than 50 hectares (125 acres) of rainforest after the slate of revocations was first announced. Hariadi said this could be indicative of what other affected companies may do or are already doing.
“Greenpeace found that as soon as [the permit revocation] was announced, there was already a speeding up of land clearing,” he said.
Indigenous and local communities sidelined again

While the companies will have an opportunity to dispute the revocations, experts and advocates point out that the local and Indigenous communities who claim ancestral rights to many of the concessions continue to be sidelined.
For decades, much of Indonesia’s land was parceled out to companies at the expense of Indigenous peoples and local farmers.
“Based on [the experience of] the past 40 years, big companies got up to 96% [of forest concessions], while local communities with their cooperatives only got 4%,” Hariadi said.
This has resulted in wide gulf in land ownership, with just 1% of Indonesians controlling more than half of the land, including forested areas that have been cleared to make way for pulpwood plantations and oil palm estates, among other commercial activity.
The permit revocation process therefore presents a rare opportunity to consider ways of redistributing the affected concessions to local and Indigenous communities.
Hariadi said the land taken back from one company should not then be given to another to exploit.
“In my view, that shouldn’t be the case because in the issue of permits and management of natural resources, there’s a lot of conflicts and injustice [stemming from disparity in land ownership],” he said.
But given the long history of the government siding with big companies in land distribution, the chances of a meaningful agrarian reform are low, he said. If the task force’s mandate is to simply reissue the land to companies that can exploit it much more quickly, “then there’s a huge potential for institutional corruption,” Hariadi said. “It’s something that has been happening for the past 90 years.”
The Widodo administration’s pro-business stance also makes it likely that the land will eventually be exploited, he said. The administration might see land redistribution to local and Indigenous communities as not generating the economic benefits that giving the concessions to big companies would bring, he added.
“I suggest to no longer use the indicator of national economic development and efficiency,” Hariadi said. “Because creating justice [for local and Indigenous communities] is certainly not ‘economically efficient.’”
Another red flag for advocates of community land rights is the lack of any mention of Indigenous peoples in the presidential decree establishing the task force, according to Maria Sumardjono, an agrarian law professor at Gadjah Mada University.
“The presidential decree doesn’t explicitly mention Indigenous peoples as among those who can receive the lands for which the permits have been revoked,” she said during the online seminar. “I’ve looked [at the decree] until I got a headache [to see] who can receive the lands.”
Totok Dwi Diantoro, an environmental law lecturer at Gadjah Mada University, said this lack of mention indicates that Indigenous communities will once again be sidelined from decisions affecting the fate of their ancestral lands.
“It’s unlikely that the presidential decree sides with local and Indigenous peoples,” he said during the seminar. “If the decree does indeed have the intention of doing so, then there should be a clause that declares [the revoked concessions] to be included in the map of the social forestry program.”