Australia: Investors pile in for a stake in our biggest beef company 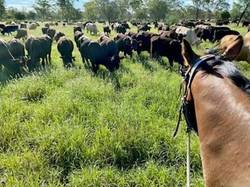 
Investors pile in for a stake in our biggest beef company
by Chris McLennan
More than a million shares were traded in Australia's biggest beef company yesterday.
The ASX activity pushed up the share price for Australian Agricultural Company to levels not seen since June 2017.
The obvious reasons for the surge in prices to $1.74 a share are the company's return to profit, good feed growing seasons across its vast holdings and record cattle prices.
There is also speculation about the intentions of rich lister Andrew "Twiggy" Forrest who has recently bought 32 million shares for $35 million to now own more than five per cent of AACo.
Also, in other financial news the financial heavyweight behind Queensland-based farm investor Laguna Bay Pastoral Company has tipped in yet more money.
The US-based Washington State Investment Board has committed another $A350 million to Laguna Bay's latest fund raising.
The share market price for AACo has opened on still good demand after the 1.1 million share turnover of yesterday.
Prices improved slightly to $1.76 on early trade.
Earlier in the month, another famous family, the Holmes a Courts, lifted their stake in AACo through Paul Holmes a Court's Heytesbury Holdings.
Heytesbury now has a seven per cent interest in AACo.
AACo is Australia's largest integrated cattle and beef producer plus it is also the oldest continuously operating company in Australia.
AACo owns and operates properties, feedlots and farms on about 6.4 million hectares of land in Queensland and the Northern Territory.
AACo specialises in grain fed beef and Wagyu beef production.
Overseas investment company Tavistock Group remains AACo's biggest shareholder.
Meanwhile, the US-based Washington State Investment Board continues to support Laguna Bay's investment strategy.
The board manages $US186 billion in pension funds for public employees such as teachers, school employees, law enforcement officers, firefighters and judges.
Laguna Bay has recently taken advantage of record farm prices to sell its big cropping operation in western Victoria.
The 3355 hectare (8290 acre) Woorndoo aggregation in Victoria's Western District was sold late last year to two farming families for about $70 million.
Laguna Bay is an investment vehicle set up in 2016, with the Washington pension fund as the main investor.
The agricultural fund manager sold Banongill Station in the Western District for about $80 million in 2020.
The historic station was its first purchase in 2016.
It bought more than $50 million worth of dairy farms in Tasmania's north west in 2018.
It was also involved in a deal which saw the Canadian Public Sector Pension Investment Board (or PSP Investments) snap up almond orchards and water entitlements in northern Victoria in 2019.
The big Canadian fund invests manages the pension plans of the federal public service, the Canadian Forces, the Royal Canadian Mounted Police and the Reserve Force and is a big player in owning Australian farm assets.
PSP Investments manages more than $A200 billion in assets.
Laguna Bay has invested in the amalgamation of numerous mixed farming enterprises to state-of-the-art raised bed development.