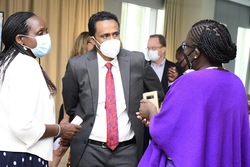 Minister for Agriculture, Mr Hussein Bashe has invited investors from across the globe to invest in agricultural sector in the country, insisting that the sixth phase government is eager to work with them and provide all the necessary support.

Mr Bashe asserted at the ongoing International Fair in Dubai (Dubai Expo 2020) that the government will accord full support to investors and companies that venture into value addition to various crops, thereby ensuring food security, because Tanzania has a large and fertile land for agricultural investment, as well as a favourable business climate.

He stated that the country is now seeking strategic investors to invest in productive investment for Tanzania and the rest of the globe, especially given that Africa will be the primary supplier of food in the next years.

Investors operating in various sectors, including agriculture are welcomed and valued in Tanzania because agriculture is one of the most important sectors contributing greatly to the country’s employment and development,” he said.

According to Bashe, the central bank’s move to lower interest rates to below 10 per cent has attracted more investors to engage in diverse fields of production, with agriculture being one of them.

The country has several agricultural research centres spread across the country where they conduct research on what varieties of crops should be grown in the areas,” he explained.

The country also has enough human resources and workforce to work in any investment area while also having many incentives for investors,” he said.

He used the example of Agro Africa Company, which has shipped over 200 avocado containers to overseas markets to demonstrate how agriculture pays well for those willing to invest in the field.

Tanzania, he noted, has various potential in the fields of vegetables, fruits, and flowers, all of which have stable markets both within and outside the country. “Tanzania offers a perfect platform for both local and global investment,” he stated, citing fertile agricultural land, industrial raw minerals, and a large and trainable youthful population with social stability.

Despite embracing international investment, the minister noted, the government will continue to support local farmers, saying that many have already received loans and equipment to help them with their farming. Bashe also visited Sheikh Ahmed Dalmook Al Maktoum, the son of Dubai’s ruler, and had the opportunity to discuss several agricultural business ideas.

By Josephine Christopher
Dar es Salaam. Tanzania’s public and private institutions have signed a total of 36 memorandums of understanding (MoUs) valued at $7.49 billion (nearly to Sh17.3 trillion) with their United Arab Emirates (UAE) counterparts.
That was revealed yesterday by Investment, Industry and Trade minister, Dr Ashatu Kijaji when addressing the business and investment forum held alongside the Dubai Expo 2020.
The event was officiated by President Samia Suluhu Hassan and attended by over 400 members of business communities from Tanzania and UAE.
Speaking during the event, Dr Kijaji said the signings testified the two sides’ commitment to continue strengthening and promoting economic ties.
“This forum provides opportunities for both countries to consolidate and strengthen economic relations through investment and trade which align with Tanzania government’s efforts to drive economic growth and sustainable development through industrialization,” she said.
She said Tanzania’s participation at the World Expo 2020 Dubai, the country has maximized the expo by promoting the country’s potential in the sector of tourism, agriculture, oil and gas, minerals, energy, livestock and fisheries, construction, transportation as well as showcasing the ki-Swahili language.