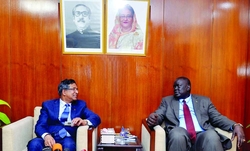 South Sudan ready to lease land to Bangladesh: Razzaque
African country South Sudan wants to lease its vast fallow land to Bangladesh for producing crops.
South Sudan's Deputy Minister for Foreign and International Cooperation Deng Dau Deng Malek placed the proposal in a meeting with Agriculture Minister Muhammad Abdur Razzaque in Dhaka today.
Malek also sought Bangladesh's cooperation in agricultural production, processing and marketing in the central African country, according to a press release of the agriculture ministry.
Speaking in the meeting, Razzaque said Bangladesh will send an expert team to identify specific areas of cooperation in this regard.
The team will comprise various experts including agricultural researchers, scientists and workers, he said.
After the meeting, Razzaque told reporters that South Sudan has more than six lakh square kilometres of land. "Most of its land is fallow, non-cultivated. There is a possibility of producing many crops by bringing this huge area under agricultural production," he said.
The issue of cultivating crops on leased land of the South Sudan government has been under discussion for a long time, he said.
Many private entrepreneurs in Bangladesh have also expressed interest and the government is also considering the matter seriously, he added.
"We will send an expert team to see what crops can be grown in South Sudan and how the land can be brought under cultivation," he said.
Specific initiatives will be taken on the basis of the report of the expert team. "I would like to invite those who want to invest in the private sector. The government will take initiative in these matters including sending workers," he said.
---

International Policy Digest | 14 February 2022
Should Bangladesh lease land from South Sudan?
by Nandita Roy
For quite some time, Bangladesh has been trying to achieve food security by shopping for farmland abroad. Recently, South Sudan has expressed interest in leasing a vast area of its fallow land to Bangladesh in order to collaborate in agricultural production, processing, and marketing in central Africa. This wouldn’t be the first time Bangladesh has leased land in Africa. Previously, two Bangladeshi companies leased nearly 100,000 acres of farmland in Tanzania and Uganda.
The concept of leasing foreign land to increase food production raises the question of whether Bangladesh should move forward and what, if any, benefits will Bangladesh gain.
Landlocked South Sudan has a total area of 248,777 square miles with a population of 11.06 million, and most of its land is fallow. Undoubtedly, there is a huge untapped possibility that can be accrued by utilizing these lands for agricultural production. The government of South Sudan has been discussing the issue of cultivating crops on their land with Bangladesh for quite a while. Recently, Bangladeshi entrepreneurs have shown an interest in farming land in South Sudan.
Bangladesh’s agricultural sector remains the lifeblood of the country’s economy. Last year, agriculture contributed close to 13.5% to the country’s GDP, and the agriculture sector employs 40% of Bangladeshis.
There are several reasons why Bangladesh should accept South Sudan’s offer. We know that Bangladesh is one of those countries in the world that has one of the lowest rates of arable land per citizen. Leasing land from South Sudan will help the country to meet the growing demand for food at home. If Bangladesh can successfully start cultivating agricultural crops in South Sudan, it will bring economic gain for Bangladesh not only by selling agricultural goods to the local market but also by exporting food to other African countries.
Bangladesh can also contribute to finding a sustainable solution to the food crisis within Africa through scientific exchanges. There are many renowned agricultural scientists in Bangladesh who are doing excellent research work on the country’s agricultural sector. If Bangladesh leases land in South Sudan, these researchers can also contribute to boosting agricultural production within Africa. This is how Bangladesh can contribute, to some extent, to finding a sustainable solution to the prolonged food crisis in Africa. Historically, there is a precedent with the U.S. Peace Corps. When the program began in the early 1960s, the United States sent volunteers with farming expertise to several underdeveloped countries to teach their farmers more optimal ways to grow food.
Once successfully implemented, this project will open a new window of opportunities for Bangladesh in other African countries which can be further utilized for increasing financial return for Bangladesh.
As the project will require hefty investments, Bangladesh should conduct a feasibility study and seek the opinion of experts before making a final decision. Also, Bangladesh should send a team of multi-sector specialists including agro-researchers, agricultural scientists, agricultural extension officials, and marketing and financial experts to examine the potential and financial viability of investing in South Sudan’s agricultural sector. But there is no doubt that if Bangladesh can build agricultural infrastructure in a responsible way, it will create a win-win situation for both countries.
---