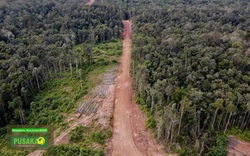 The President of the Republic of Indonesia, Joko Widodo (06 January 2021), stated that the government is continuously improving the natural resources governance in order to achieve even distribution, transparency and equity, to correct disparity, inequity and natural degradation. Therefore, mining, forestry and state land use permits are continuously evaluated in a comprehensive manner.

According to Yayasan Pusaka Bentala Rakyat (Pusaka), policies on the improvement of natural resources governance, evaluation and sanction of company business license revocation, must be followed by concrete actions and law enforcement, for the purpose of restoration of the people’s rights and the environment, which engage civil society organizations and carried out in a transparent manner.

Based on Pusaka’s monitoring and information from community networks, there have been deforestation activities in the oil palm plantation area of PT Permata Nusa Mandiri (PNM) in the region of Nimbokrang District, Jayapura Regency, Papua Province, in the 2nd Week of January 2022, which are allegedly undertaken for the development of oil palm plantation business. Whereas it is known that PT PNM’s forestry concession permit which was issued in 2014, has been revoked by the official of the Ministry of Environment and Forestry in 2022.

Other companies the permits of which have been revoked but are still actively opening, logging and clearing forests are PT Subur Karunia Raya in Teluk Bintuni Regency, West Papua Province, and an oil palm company, PT Rimbun Sawit Papua in Fakfak Regency, West Papua Province. We received reports that the aforesaid oil palm plantation companies are allegedly conducting business development without Land Use Rights and the logging locations are allegedly outside the plantation business license, which occurred by the end of 2021.

Based on the data of the Directorate General of General Law Administration of the Ministry of Law and Human Rights, it is known that the shareholding and company management of PT Permata Nusa Mandiri, PT Subur Karunia Raya and PT Rimbun Sawit Papua, are interrelated to Indo Gunta Group and Salim Ivomas Pratama Tbk (SIMP) Group, which also respectively known as Salim Group/Indofood Group.

These company Groups control and own 10 plantation companies in the Land of Papua, which is located in forest areas with a total size of 266,736 hectares. The companies obtained the licenses directly from the government, and or acquired from other companies, without the acknowledgement of the local customary communities, and in violation of the regulatory requirements. So far, the said land and forest have not been fully commercialized, they are under conflict and there are still rejections from the local customary communities.

“The regional and national governments should be taking proactive measures to follow up the evaluation results and the decision on sanction of business license revocation, by prohibiting the companies’ activities, enforcing the law and imposing a criminal sanction, penalty payment and loss compensation, for the affected communities and restoration of the environment, as stipulated in the laws and regulations”, said Tigor G Hutapea, Pusaka’s Advocacy Division Staff.

The disregard for and indifference towards the implementation of the said decision may lead to conflicts and increase the tension between the communities, the government and the companies. Similarly, in the context of respecting human rights and preventing conflicts, the companies should respect the decisions of the government and the communities, instead of forcing their own wills.

Yayasan Pusaka Bentala Rakyat demands that the government should stop granting ease of licensing and issuing new licenses for public and private companies (both domestic and foreign) which have been proven to have committed natural degradation activities and human rights violations.