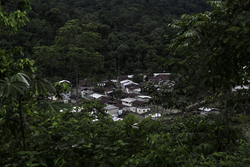 The village of Wimbi in Ecuador’s northern province of Esmeraldas, one of the villages affected by the Energy & Palma operations. (Photo: Jonatan Rosas)
Forest Peoples Programme | 3 December 2021

This Open Letter is urging consumer goods companies to fully disclose and explain its process of ongoing supply chain due diligence with regard to Energy & Palma, an Ecuadorian Palm Oil company. Energy & Palma has opened a Strategic Lawsuit Against Public Participation (SLAPP) against leaders in the Barranquilla de San Javier community after they tried to defend their land from invasion by the palm oil company.
After the protests were violently repressed, the company filed a legal complaint against the community leaders for US$320,000 in compensation for alleged loss of palm harvest, and a judge later ordered four land rights defenders from the community to pay US$151,000 to Energy & Palma.
The letter, signed by 28 civil society and environmental organisations, highlights that multinational companies such as Nestle, Pepsi, Kellogg and General Mills have direct sourcing relationships with Energy & Palma and La Fabril group, and therefore, and therefore bear a responsibility to uphold human rights and environmental standards