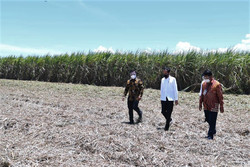 When the Indonesian government announced ambitious plans to ramp up domestic food production as the pandemic set in last June, officials claimed that it would not lead to “environmental destruction”.

Instead, as COVID-19 threw the world’s supply chains into disarray, officials would ward off the threat of an impending food crisis by boosting crop yields and promoting modern, environmentally sensitive farming techniques.

But within five months, workers acting under the instructions of the Ministry of Defence had fired up their chainsaws to cut down orangutan habitat in Borneo and replace it with a giant plantation.

The story behind this plantation reveals how the ministry has exploited regulations that were drafted hastily during the pandemic, stripping away environmental safeguards and opening up vast new areas of land for agriculture.

An investigation by The Gecko Project and Tempo discovered that the ministry moved so fast that it failed to comply even with these scaled-back rules, potentially illegally clearing hundreds of hectares of rainforest. Now, they are targeting the forests of Papua.