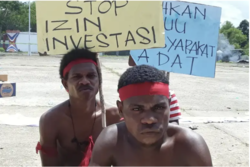 
Indonesian court delivers victory for Indigenous rights in Papua
An Indonesian court has delivered a landmark victory for Indigenous rights in a case that pitted West Papuan activists against several palm oil companies.
The Jayapura Administrative Court in West Papua Province on Tuesday ruled in favour of a district head who had revoked permits allowing more than a dozen palm oil companies to operate in Indigenous forest areas and turn them into plantations.
Indonesia volcano erupts again, rescue operations suspended
In Thailand, Myanmar exodus a lifeline for COVID-battered economy
Can the global economy battle through another COVID-19 setback?
Indonesian firms, unions in waiting game after job law ruling
Johny Kamuru, head of Sorong Regency, cancelled the permits after Indigenous groups said they had not consented to the conversion of their ancestral lands into palm oil concessions and a review by the provincial government recommended they be revoked in February 2021.
Three of the companies affected took legal action against Kamaru, including PT Papua Lestari Abadi and PT Sorong Agro Sawitindo, whose bid to have their permits reinstated was rejected by the court.
Kamuru has also been sued by PT Inti Kebun Lestari in a separate, ongoing case.
Under authority granted by President Joko “Jokowi” Widodo in 2018, palm oil permit reviews are supposed to be undertaken by the Coordinating Ministry for Economic Affairs and the Ministry of Environment and Forestry. Neither ministry commented publicly on the case in Sorong.
In 2019, Jokowi issued a moratorium on the development of new palm oil estates as part of a push to end deforestation in the country. The moratorium expired in September of this year and was superseded by Indonesia’s controversial jobs creation law.
The law allows companies that have been operating illegally to apply retroactively for permits within three years and escape legal sanctions if they do so.
The land involved in the dispute belongs to the Moi people, one of more than 250 ethnic groups in Papua.
A moratorium on new palm oil estates expired in September of this year [File: Courtesy of Ambrosisus Klagilit]
Following the ruling, Moi advocates and the head of the regional people’s representative council in Sorong celebrated in front of the local district office.
Speaking to Al Jazeera following the ruling, Ambrosisus Klagilit, advocacy coordinator for the Sorong chapter of the Indigenous Peoples’ Alliance of the Archipelago (AMAN), said he was “grateful” for the legal victory.
“This ruling is important to us Indigenous peoples because we believe it to be a just decision that assures our future and our lands. We feel protected now,” he said.
The total land covered by the three companies spans some 90,031 hectares (222,471 acres), according to Greenpeace Indonesia – an area larger than New York City.
In October, Greenpeace Indonesia released a report in conjunction with environmental mapping specialists TheTreeMap that found one-fifth of the country’s oil palm plantations were in areas where extraction is illegal, including Indigenous lands, national parks, watersheds and conservation areas designated as “national forest estate”.
Since 2000, forest estate land totalling nearly one million hectares (2,471,054 acres) has been released for plantations in Papua Province, according to Greenpeace, with “systematic violations of permitting regulations” a common occurrence.
Indonesia is the world’s largest exporter of palm oil, bringing in $5.7bn or 11 percent of the country’s annual exports. The resource is used in a slew of products, from soap to chocolate.
Indonesia exported 37.3 million tonnes of palm oil in 2020, commanding 55 percent of the global palm oil market, according to the Indonesian Palm Oil Association (GAKI).
Palm oil exports rose by 32 percent in July 2021 compared with the previous month to reach $2.8bn, according to the association.
Play Video
Syahrul Fitra, a campaigner for Greenpeace Indonesia, told Al Jazeera the ruling was a major victory for Indigenous rights and environmental preservation.
“Greenpeace Indonesia has found that management of the palm oil industry is rife with problems such as intrusion into Indigenous lands, overlaps with the national forest estate and other protected areas, unprocedural permitting, and permit compliance failures,” Fitra said.
“The head of Sorong district acted correctly to redress these wrongs when he took the concrete step of cancelling a number of oil palm plantation permits, acting on a thorough review by the West Papua Provincial government in conjunction with the Corruption Eradication Commission (KPK).”
Greenpeace Indonesia said it welcomed the ruling and hoped it would embolden other districts and provinces as well as the national government to support permit reviews and revocations as needed.
Wirya Supriyadi, advocacy coordinator of the Papua office of the Indonesian Forum for the Environment (WALHI), described the ruling as “a positive breakthrough” and a “victory” for the Moi peoples.