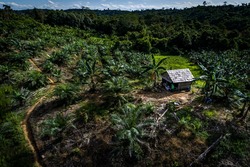 An analysis of land conflicts involving palm oil companies in Indonesia, the world’s biggest producer of the commodity, shows the country lacks effective mechanisms for addressing these problems.

Indonesia has no effective mechanism for resolving its epidemic of land conflicts between rural communities and palm oil companies, according to a new study.

Indonesia is the world’s top producer of palm oil, but the industry’s rapid expansion has fueled deforestation and allegations of land grabbing throughout the archipelago nation.

The study, produced by Dutch and Indonesian academics in collaboration with six Indonesian NGOs, is billed as the first-ever systematic documentation of a large number of land conflicts in the Southeast Asian country.

Researchers analyzed 150 cases in four provinces — Riau, West Sumatra, West Kalimantan and Central Kalimantan — randomly selected from a list of 554 cases they identified by examining media and government reports from the past decade. They interviewed community representatives from each of the 150 cases, in some cases traveling to the affecting villages to meet sources in person.

They found that existing channels for addressing conflict between villagers and plantation firms — namely, informal mediation facilitated by local authorities, the courts, and the Roundtable on Sustainable Palm Oil — generally “fail to produce meaningful results for the affected communities.”

These mechanisms rarely solved conflicts, and even when they did, the process took nine years on average.

In nearly 70 per cent of the studied conflicts, the communities reported that they had not or had barely succeeded in addressing their grievances. These cases had been ongoing for an average of 11 years.

With no other avenue for redress, communities often resort to staging demonstrations. These typically take the form of peaceful protests in front of government buildings, sometimes escalating into more confrontational actions in or near plantations, such as land occupations and blockades, according to the study.

“Yet road blockades are generally brief, land occupations are rarely sustained and we could find relatively few incidents of violence perpetrated by community actors,” wrote the researchers, who come from Indonesia’s Andalas University and KITLV Leiden and Wageningen University & Research in the Netherlands.

“Most of the violence that we documented … actually concerns acts perpetrated by either the police or by security forces hired by palm oil companies.”

The 150 cases resulted in 243 people injured and 19 deaths, according to the study.

The researchers documented “at least 30 demonstrations or blockades” that were met with a violent reaction from the security forces or local enforcers appearing to operate on behalf of the company. They also found 55 incidents of violence taking place outside the context of demonstrations, such as when police “visited villages with the purpose of intimidating inhabitants.”

The researchers also found that protest leaders are frequently “criminalised,” or arrested and imprisoned on sometimes dubious charges. According to the study, community members were arrested in 42 per cent of the cases, for a total of 798 arrests, with “fabricated or at least trumped up” accusations in many of the cases.

“In the light of these findings we conclude that the political rights of Indonesians affected by the expansion of palm oil plantations — in particular the right to engage in peaceful protest — are being curtailed,” the study says.

“To protect these rights, more efforts are needed to investigate (police) violence and to ensure that critical community leaders are not criminalised.”

Conflicts typically involve multiple grievances on the part of communities. In 66 per cent of the cases analyzed, community members accused the company of land grabbing — seizing their lands without their consent.

More than half the cases involved grievances over legally mandated profit-sharing schemes.

Indonesia requires oil palm firms to enact “partnership” schemes with local communities, providing them with smallholder oil palm farms equivalent to 20 per cent of the overall land concession, or with profits from an equivalent area of the plantation. But villagers frequently accuse companies of failing to meet their obligations.

Several factors are behind the failure of the existing conflict resolution mechanisms, according to the study.

The government’s failure to recognize Indigenous land claims and to process land titles for rural residents across the country weakens their bargaining position, especially in the courts.

When cases do go to court, judges tend to rule on the basis of legal technicalities rather than the substance of community grievances, the researchers found. Only nine of the 37 cases that went to court saw the community emerge victorious. Five of those rulings remain unimplemented.

“This collusion constitutes the main reason why the alternative dispute resolution facilitated by local authorities generally fails: due to their backing from local authorities, company representatives can ignore or stall such mediation processes without running a risk,” the study says.

Poor leadership within the communities themselves, and a lack of organising experience, also hampers efforts to resolve conflicts.

To solve the problem, the researchers urge the government to set up impartial “mediation boards” or “conflict resolution desks” at the provincial or district level, staffed by professionally trained mediators appointed by local governments.

“Given the considerable suffering and economic damage caused by these conflicts, conflict resolution deserves more government funding,” the study says.

Surya Tjandra, Indonesia’s deputy land minister, said during an online event marking the launch of the study that he welcomed the suggestion to set up mediation boards, but that it would first need to be proven as capable of resolving conflicts before the government could commit to establishing conflict resolution desks by allocating a budget for it.

He said his ministry was now testing the use of independent mediation agencies to solve two land conflicts, and if they succeeded, it could be used as an argument to establish a special body to resolve conflicts. He declined to name the conflicts serving as pilot cases.

“We realize that there’s indeed a need for an independent body because some of the conflicts happening is the fault of the land agency in the past,” Surya said.

Authorities must also exercise closer supervision over companies’ land acquisition, improve law enforcement when developers violate the rules and improve transparency, according to the study.

The researchers singled out the land ministry’s failure to publicly release maps of land concessions handed to palm oil companies, known as HGU maps, despite an order from the Supreme Court to do so.

“The decision of the Indonesian government to keep secret all information regarding HGU plantation licences constitutes an unnecessary and unjustifiable obstacles for conflict resolution,” the study says.

During the launch event, Surya said the ministry needed to validate the HGU data before it could release them to the public.

“Once it [the validation] is done, for me there’s no reason for us to not open [the data and maps],” he said. “But it takes process and time.”

The researchers said the government should also address the issue of intimidation and criminalization against community members by launching an investigation into the matter and taking measures to prevent such practices in the future.

Abetnego Tarigan, the head of human development in the office of the president’s chief of staff and a former environmental activist, said during the launch event that his office had been paying attention to the problem of land conflicts.

“We’ve sent letters to the chiefs of the military and the police to be careful in handling agrarian conflicts,” he said.

The researchers also highlighted the failure of the Roundtable on Sustainable Palm Oil (RSPO), the world’s largest association for ethical palm oil production, to resolve community grievances, a longstanding issue.

While 64 of the 150 cases involved RSPO member companies, only 17 of them were brought to the RSPO, and just three of those were successfully addressed, according to the study. The researchers attributed this to the complexities of RSPO procedures and the limited capacity of civil society to help communities.

Therefore, the researchers said, the RSPO should provide more support to NGOs that help communities in reporting their grievances to the body.

RSPO assurance director Tiur Rumondang said at the launch event that the scheme’s complaint system wasn’t perfect and that the RSPO was trying to improve it.

While the RSPO’s complaint system is deemed to be ineffective at the moment, report co-author Afrizal, a lecturer from Andalas University, said it was important to use as many conflict-resolution mechanisms as possible to increase the odds of the conflicts being successfully resolved.

“There’s an urgent need to solve palm oil conflicts faster and more effectively,” he said at the launch event. “These conflicts damage people’s welfare, the profit and image of companies, as well as the reputation of Indonesia’s palm oil.”

This story was published with permission from Mongabay.com.