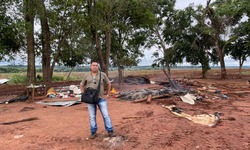 
Indigenous community evicted as land clashes over agribusiness rock Paraguay
by Laurence Blair in Raúl Arsenio Oviedo
Armed police with water cannons and a low-flying helicopter have faced off against indigenous villagers brandishing sticks and bows in the latest clash over land rights in Paraguay, a country with one of the highest inequalities of land ownership in the world.
Videos of Thursday’s confrontation showed officers in riot armour jostling members of the Hugua Po’i community – including children and elderly people – out of their homes and into torrential rain.
Tractors then tore down the thatched wooden cabins and ripped up crops from the surrounding land, which is claimed by a Mennonite soybean farmer.
Later in the day, police armed with submachine guns briefly allowed a Guardian reporter and Mario Rivarola, a craftsman and community organizer, into the ruined village.
Stalks of maize lay in the churned-up mud. Clothes, flip-flops, half-finished meals and broken bed-frames were strewn about. A pair of scrawny kittens wandered among the flaming wreckage.
“This is another blow against indigenous peoples,” lamented Rivarola, whose relatives had lived in the village. The surrounding land is valuable, with fertile soil, a river and a paved road on hand. But it also has a spiritual and environmental importance, he said.
“The graves of our grandparents are here,” Rivarola explained, adding that the community had returned 10 years ago to occupy their ancestral land. “We want to recover its history and preserve the forest that remains.”
At the Cop26 conference in Glasgow earlier this month, western leaders agreed to give indigenous peoples at least $1.7bn to support their crucial role in protecting the world’s carbon-dense forests.
Of the record 227 environmental and land defenders killed worldwide in 2020, a third were indigenous, with Colombia, Mexico and Brazil topping the list of the deadliest countries.
Also in Glasgow, over 100 countries – including Paraguay, after some hesitation – promised to end deforestation by 2030.
But a wave of rural evictions in Paraguay this year demonstrates the challenge in converting these agreements into concrete action to halt agribusiness from advancing into Latin America’s surviving forests – and dislodging their inhabitants.
Paraguay’s forests – especially in the parched Chaco region to the west – are vanishing faster than perhaps anywhere else on Earth, say researchers. Severe flooding, historic droughts and uncontrolled bushfires have made headlines in recent years.
Between May and June this year, as the Covid-19 pandemic raged, at least seven native communities across the country were forcibly removed from their homes.
In September, Mario Abdo Benítez, Paraguay’s conservative president, approved a law doubling jail sentences – to up to 10 years – for those found guilty of illegally occupying private land.
And this November alone, five indigenous and small farmer settlements were destroyed by police, leaving hundreds homeless.
More than a hundred human rights campaigners gathered in Asunción, Paraguay’s capital, branded such evictions an “express violation” of Paraguay’s constitution and international treaties.
“There’s a direct relationship between these evictions and climate change,” said Guillermo Achucarro, a climate policy researcher with Base-Is, a thinktank.
Agriculture is Paraguay’s largest single contribution to global heating – accounting for about half of the country’s emissions of gases like carbon and methane – followed by deforestation.
“The people who deforest and emit greenhouse gases are the big landowners,” Achucarro added. “Most of them are soybean planters and cattle ranchers. They’re the same people that control the police and use them to kick out indigenous and campesino communities.”
In Paraguay, land is concentrated in fewer hands than anywhere else in the world, according to the World Bank. Just 2% of people own over 80% of farmland.
The region between the Brazilian states of Maranhão, Tocantins, Piauí and Bahia is considered the showcase of the country’s agribusiness
Paraguay’s delegation to Cop26 included several agribusiness representatives but no indigenous people. Along with Venezuela and Bolivia, Paraguay was initially among the only Latin American countries not to sign the historic agreement to end deforestation within a decade. It then backtracked amid a public outcry.
“It was shameful,” said Achucarro.
Indu, the state institution responsible for safeguarding Paraguay’s 19 native peoples, did not respond to requests for comment.
Asked how he felt among the destructive aftermath of the eviction at Hugua Po’i, Rivarola was silent for a while.
“Powerless,” he finally said. “But sooner or later we will win this land back, the territory of our ancestors. We’re not going to give up the fight because of this.”