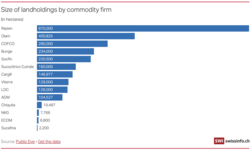 Research by investigative non-profit Public Eye has revealed that trading companies with a Swiss presence – or their subsidiaries – own over 550 plantations covering over 2.7 million hectares.These companies buy and sell commodities like sugar, soy and palm oil from trading offices in Geneva or Zug and include big players like Cargill, LDC and ADM. The agricultural land they own is equivalent to six times the arable land available in Switzerland.
More than half of the land controlled by Swiss traders is used for sugarcane production and a quarter for palm oil cultivation. Other important crops grown on these landholdings include citrus fruits, rubber, coffee, bananas and rice. Public Eye was not able to find any significant Swiss stake cocoa or cotton.
The trading companies mentioned exercise control over agricultural land in a variety of ways. These include user rights, long-term leases or beneficial ownership depending on what the law of the land allows, and which form of ownership is more profitable.
Minimising risk

According to Public Eye, the choice of crop cultivated in these plantations is designed to minimise risks. Sugarcane, palm oil and soy – which make up the bulk of the crops grown on the landholdings – are so-called "flex crops". They have multiple uses and can be used to produce food, feed or biofuel. Compared to other agricultural products, flex crops provide more secure returns in the long term, as they allow traders to react more flexibly to market trends and price fluctuations, thus limiting the risks.
Another reason traders choose to invest in growing sugarcane, palm oil and soy is their production is not labour-intensive. For example, the mechanisation of sugarcane cultivation in Brazil is as high as 95% in some regions and requires very little manual labour unlike the cultivation of cocoa.
Conflicts
Public Eye wants the traders to take more responsibility for human rights and environmental violations on their landholdings. Allegations made against commodity firms include growing sugarcane without an environmental permit (Biosev in Brazil), depriving indigenous communities of their livelihoods (Cargill oil palm plantation in Indonesia), evicting local people without compensation (Neumann Kaffee Gruppe coffee plantation in Uganda) and threatening trade unions (Santa Rita plantation of Chiquita in Honduras).
Public eye claims that traders do not take sufficient responsibility for these violations on their plantations and that there is a lack of binding and effective regulations in the countries where these companies are based, such as Switzerland.
In fact, just last year, Swiss citizens voted on an initiative that would have made companies legally liable for their actions abroad if they failed to carry out sufficient due diligence, regardless of the industry and also in relation to subcontractors. The widely followed proposal received a narrow majority of votes, but failed to win the majority of cantons that is required for an initiative to pass in Switzerland. The rejection of the initiative means a milder counter-proposal (without a liability clause) will automatically come into force.