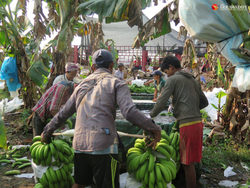 A banana plantation in Lamyang, Kachin State in March 2019. / The Irrawaddy
The Irrawaddy | 23 November 2021

The early 2000s saw a boom in the banana farming sector in southern China. By 2008, the fruit had become an increasingly popular target of investment, with low supply and soaring prices, and banana plantations were set up across China, as well as in Myanmar and Laos.

In rural areas of Laos and Myanmar, farming bananas for export to China is a key avenue of employment: thousands of local people are employed in a business which spans thousands of hectares of land. A 2017 report from Plan International revealed that Chinese-owned banana plantations in northern Laos’s Bokeo Province alone cover more than 11,000 hectares, generate US$100 million in annual exports and make up 95 per cent of all exports in the region. At the same time, a Mekong Region Land Governance report stated that in 2019 northern Myanmar’s Kachin State was estimated to have 170,000 hectares of land converted into banana plantations.

The Chinese-owned plantations in Southeast Asian countries use Chinese technology to make tissue-cultured bananas, green in color and bigger than the normal yellow fruit.

Most of the plantation workers are aware of shoddy working conditions, yet choose to engage in this work because it pays more than other options. Banana exports bring in more money than any other crop. Despite this, individual workers continue to make an estimated US$200-300 per month, even as the industry rakes in over US$200 million annually.

Landowners leasing their land to the Chinese-run plantations are aware of the many drawbacks associated with banana farming, but still rent out their land, or are sometimes deceived into doing so, because of the limited market for traditional crops as well as the high rents they receive. But the consequences of that appear quickly, as local people struggle with land, environmental and health issues.

The plantations are run and overseen by Chinese employers and while the labor tending to the plantations are from Myanmar or Laos, they are often migrants from other parts of those countries. This is the preferred practice in Kachin State. The plantation owners would rather hire migrants than local residents, who are more likely to complain about problems. Migrants, on the other hand, get no help in the event of any disputes. They are largely underpaid, receiving an average 6000 kyats, or US$3.28 per day, but there is no one to help them with their problems. Working conditions are exceedingly poor, the plantations are rife with toxic chemicals used in farming the fruit, including Chlorpyrifos, which can cause serious health problems such as lung cancer and lead to death.

Taking into account the dire environmental and health hazards, the government of Laos imposed a ban on new plantations and contract extensions in 2017. However, this ban was rescinded in 2018 following a hit to the country’s exports, with the plantations being asked to implement better management and comply with local laws relating to the use of agricultural chemicals. Despite these superficial attempts at reform, a study carried out in 2021 by the International Water Management Institute and the National Agriculture and Forest Research Institute in Laos found chemical contamination in soil and water resources, arising from the banana plantations in the northern parts of the country, which has a hazardous impact on the environment and people’s health.

The chemicals used in the plantations end up in the surrounding water sources, contaminating the rivers and creeks. Workers have reported that while they used to drink the water from the streams and wash with it, they cannot do so anymore for fear of their health, as the contaminated water is pumped back to those sources. Polluted water has also adversely affected the local marine life, killing off fish stocks.

Plantations often employ ‘worker couples’, a hired pair [sometimes, but not always, husband and wife] that live full-time on the plantations as laborers for months on end. Paid for the whole season, the worker couple can make up to four million kyats, or US$2,300. However, that is dependent on the harvest. If the crop is damaged before the harvest, workers are often left unpaid.

The worker-couples have to put up with harrowing working and living conditions. From residing in ramshackle shelters without any showers or washrooms, to carrying up to 60kgs at the time of harvest, the laborers put in immense efforts. The living quarters for the workers consist of metal sheds with just enough space for a bed, with them having to go to the toilet outside and wash in streams which may well be contaminated. While children under the age of 16 are not allowed to work on the plantations, in practice that rule is often flouted with some plantations employing 14-year-olds.

Previously, workers were not allowed to go home and were under threat of being fired if they left the plantation for more than a week. However, the COVID-19 pandemic has led to stricter rules, with workers not being allowed to leave even to buy food or other necessities. Instead, they are forced to buy them from Chinese-run stores at inflated prices.

Following these increasingly exploitative practices, over 500 workers on a Chinese-owned plantation in central Laos quit their job, reports Radio Free Asia. Workers also complained of exhausting working hours, late or no pay, as well as exposure to toxic, banned chemicals which threatened their health.

Despite two local men employed at a Chinese-owned plantation in central Laos’s Borikhamxay Province reportedly dying from exposure to toxic chemicals earlier this year, the employers have never made any provision to provide workers with healthcare if they fall sick, or to pay any compensation in case of death. There have been incidents where workers report being beaten up at the Chinese-owned plantations by employers for ending their work day early on account of exhaustion.

Despite the dangerous working conditions, the lack of basic amenities, mistreatment and exploitation, there continues to be a slew of workers coming in to toil on these foreign-owned plantations, because they need jobs and lack other options to earn a good income. There are no checks in place to protect the interests of the workers and migrant laborers, and abuse and exploitation of the workers continues to take place.

The themes of socialism and common prosperity that the ruling Chinese Communist Party holds so close to its heart do not seem to extend beyond the country’s own borders, with the Chinese-owned plantations unaccountable for the welfare of their workers and unwilling to take any responsibility when issues crop up. It remains to be seen if Chinese businesses in foreign countries will move towards making any efforts to secure the rights of their local workers, or if the system of oppression and inhuman work conditions remain in place for the foreseeable future.

Yan Naing is a pseudonym for a keen observer of Myanmar-China affairs.