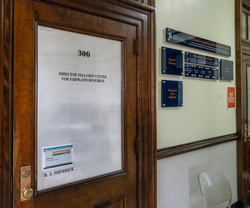 The office of Dr. Bruce Sherrick, and also the home of the University of Illinois’ TIAA Center for Farmland Research. Darrell Hoemann/Investigate Midwest
Illinois Newsroom | 16 Nov 2021

TIAA-CREF invests heavily in farmland, so it paid a university to research it.

Read Part I and Part III of this series.

by Dana Cronin and Johnathan Hettinger

CHAMPAIGN — In 2013, mammoth U.S. investment company TIAA-CREF gave $5 million to the University of Illinois — to study an area of investment where the company has made a, sometimes controversial, name for itself.

The money aimed to fund a research center, branded with the company’s name, that would explore the financial niche of farmland investment.

It’s the fourth largest donation given to the university’s agriculture school in the last 10 years, according to data obtained by Harvest Public Media and Investigate Midwest through the Freedom of Information Act.

A letter submitted to the university called for the center to research “agricultural asset valuation and financial performance with emphases on farmland markets (and) factors influencing farmland values.”

TIAA-CREF manages the retirement accounts of educators, researchers and public service workers. That includes a small number of University of Illinois employees.

Farmland is a big part of that investment portfolio. Through its acquisition of Nuveen’s Westchester Group Investment Management, TIAA-CREF proclaims it’s the top manager of farmland assets in the world, with more than 2 million farm acres under its control.

As part of its Big Ag U series on the influence of corporations on public universities across the Midwest, Harvest Public Media and Investigate Midwest combed through documents related to the founding of the TIAA Center for Farmland Research to find out how it operates under the name of the number one farmland manager in the world, and one that’s been marked by controversy.

TIAA-CREF touts its commitment to responsible farmland management, including environmental, social and cultural principles. But it’s recently been the target of criticism that contends otherwise.

In 2015, the investment giant came under fire for its farmland holdings in Brazil.

A report published by a nonprofit group concluded TIAA-CREF acquired property through working with a known land grabber in the region. The report, by researchers at Brazil’s Social Network for Justice and Human Rights and Grain, an international organization that supports local land ownership, said the company obtained land from a businessman “accused of resorting to an illegal and often violent process of land grabbing.” Land grabbing is the process of acquiring land often illegally and by force, and in this case, allegedly involving gunmen snatching property from poor farmers.

TIAA-CREF has largely stood by its Brazilian landholdings, saying they’re legal and not tied to any land grabs. The company does acknowledge, however, that land registries in that part of Brazil are unreliable.

The controversy generated backlash, including from some of TIAA-CREF’s own clients.

Laura Graham and Meena Khandelwal are anthropology professors at the University of Iowa, where they also have retirement accounts set up and managed by TIAA-CREF. They recently penned an op-ed demanding “transparency and accountability in (TIAA-CREF’s) investments related to land grabbing and deforestation.”

Graham’s research focuses on indigenous people, primarily in Brazil, where TIAA-CREF has its largest concentration of farmland investments.

“I work with Indigenous peoples that are trying to protect themselves from the negative effects of this massive agribusiness boom,” she said. “And so it’s very ironic that my own retirement is supporting something that my research and my work with communities is in direct opposition to.”

Graham and Khandelwal also point to domestic farmland management issues, including TIAA-CREF’s vast landholdings in the Mississippi Delta, where Black farmers have been largely displaced from their farms as a result of land theft.

That type of criticism, of big corporations buying up and renting out farmland, isn’t new. Critics point to a whole host of problems associated with so-called “non-operating landlords.”

For a corporation focused on earnings, farmland is seen as a good investment. It’s relatively stable, unlike the stock market, and it can be particularly lucrative when the agricultural economy is doing well.

But it can also drive up competition for that land and, in the process, increase farmland prices. That makes it harder for everyone — but especially beginning and non-traditional farmers — to gain access to land.

“It is by and large women and folks of color who make up this new and beginning farmer group,” said Gabrielle McNally, who leads a national initiative that supports women landowners with American Farmland Trust.

Research also shows that conservation farming tends to fall by the wayside in areas with large clusters of rented farmland.

And while TIAA-CREF says it employs environmentally friendly farming practices on its land, including the planting of soil-saving cover crops and an avoidance of plowing up the ground, that’s difficult to verify because the exact locations of its farmland holdings are private.

“They put out the reports and maps, but it doesn’t allow you to really examine what’s going on,” said Doug Hertzler, senior policy analyst with ActionAid USA, and whose retirement account is also managed through TIAA-CREF.

Hertzler analyzed and cross referenced TIAA-CREF’S farmland map. He ultimately tracked down some of the company’s holdings and said he saw no evidence of cover crops or other sustainability measures.

The TIAA Center for Farmland Research focuses on land as a financial asset instead of a physical one. It generates research for the “lending community, investment community, farmland owners and operators, and policymakers at both the state and national level.”

Bruce Sherrick, University of Illinois professor of farmland economics and head of the center, said TIAA-CREF’s gift generates income that also helps to support farmdoc, the agriculture department’s outward facing research arm. He said he has full discretion over the center’s research agenda as well as its budget.

The $5 million gift — dolled out over the course of three years — is an endowment that generated $203K last fiscal year, according to a financial report obtained via FOIA.

The money came at a good time, according to Sherrick.

The center was, for a time, guided by an advisory board, made up of employees of TIAA-CREF and the university.

Documents pertaining to the advisory board were not made available. Sherrick said the board has disbanded since its inception due to a critical mass of members leaving for other jobs or retiring.

Sherrick also said when TIAA-CREF made the initial donation in 2013, its farmland holdings in Brazil hadn’t yet been called into question. Yet he said the investment giant is often unfairly targeted for how it manages farmland and that he largely supports their land management strategies.

In addition to the impressive output of farmland research from the University of Illinois, there’s a reason the center was set up in Illinois, said Wendong Zhang, an associate professor of farmland economics at Iowa State University.

Unlike other Midwestern states including Iowa, Nebraska and Missouri, Illinois has no anti-corporate farming laws. Those statutes were passed in the 1970s to protect family farmers and limit absentee land ownership that TIAA-CREF invests in so heavily.

Corporate farmland ownership was seen as a threat to rural communities and the environment, leading many Midwestern states to pass laws restricting ownership of farmland to only family or other “authorized” entities.

Illinois, on the other hand, has historically been much more friendly to corporations seeking to buy farmland.

The center’s tagline is: “Advancing farmland markets through research and information.” Thus, Sherrick said, the center serves anyone who cares about farmland values — not just its benefactor.

The center — like other operations running on no-strings-attached corporate gifts to universities — creates a model in which research can continue in perpetuity, Sherrick said, regardless of whether a professor leaves the university.

U of I has made a name for itself in the area of farmland economics, which he said wouldn’t have been possible without this donation.

“This provided a platform for a stronger connection between the academics in this field with (the) investor community,” he said.

And instead of a more traditional focus on farm economics, like how the price of corn and soybeans impact an operation, Zhang said the center has shifted the focus to the farmland itself as the commodity.

“This is sort of a new-line of thinking,” he said. “It has highlighted the financial and the investment aspect of this.”

“It’s to help investors know when is a good time to get into the farmland market, in my view, and where they might be able to do that,” he said.

He said such corporate-university partnerships could lead to further rural decline, and ultimately do more harm than good to the agricultural community.

“We need to be looking at farm policies which would strengthen small-scale farmers and make land more accessible to them,” he said. “People that have a worldview that playing the market is what matters aren't thinking about the well-being of those rural communities.”

This story is part of Big Ag U, a series by Harvest Public Media and Investigate Midwest on corporate influence at public universities across the Midwest. Harvest Public Media reports on food systems, agriculture and rural issues through a collaborative network of NPR-stations throughout the Midwest and Plains. Investigate Midwest is an independent, nonprofit newsroom covering agribusiness, Big Ag and related issues.