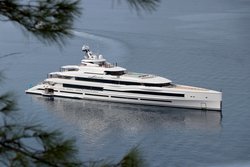 
Business or pleasure: Bill Gates eyes investments in Turkey
One of the richest people in the world, Bill Gates, is rumored to be mixing business with pleasure as he holidays in Turkey, according to sozcu.com.tr.
The outlet reported that Gates had breakfast at the villa of one of Turkey's leading businesspeople.
It claimed that the Microsoft founder is looking for approximately 741 acres of land to invest in within the borders of Muğla and Aydın, and that he had been in touch with businesspeople and companies in Turkey about the purchase.
It was said he plans to extend his holiday in Bodrum for another week for this purpose.
Arriving about a week ago with two yachts, a 107-meter (350-foot) luxury yacht named “Lana” and the “Wayfinder” with 30 guards on board, Gates started in Bodrum before hopping from bay to bay in Kuşadası, Didim, Gökova, Datça, Fethiye and Marmaris before returning to Bodrum today.
After dropping anchor in Cennetköy in Bodrum's Gölköy district, Gates and his entourage arrived at the villa by speedboat in the morning, according to Sozcu.
This isn’t the first time rumors have emerged of Gates investing in Turkey.
Back in April, speculations that Gates bought 22,000 acres of agricultural land in Thrace surfaced on social media and a few local news sites, causing the land prices in the area to skyrocket quickly.
Gate's latest getaway to Turkey that started on Sunday in Bodrum marks his second visit to Turkey in four months.