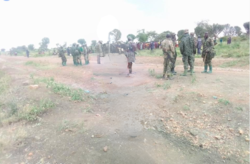 
Militarized corporate agriculture companies are resorting to reprisals to grab land
Lately, Ugandans have noted an increase in military deployment and the presence of government soldiers on multinational companies‘ plantations. The latest beneficiary of the deployment is the Kiryandongo Sugar Company limited in Kiryandongo district whose plantation’s guard ship has doubled. The company is using soldiers to carry out retaliatory attacks against community land rights defenders and activists.
Other sectors that have witnessed increased army deployment include tropical forests, on the lakes and mineral-rich regions namely Albertine graben especially along East African Oil Pipeline, and Karamoja region respectively.
The latest incident is the kidnap of Otyaluk David Richards a Kiryandongo district-based land rights defender. A group of five soldiers, with three cladding government army uniforms, invaded the defenders’ home, found him in his compound, got him handcuffed, and pushed him in their vehicle before whisking him away.
Before Otyaluk’s kidnap, an area local council chairperson survived being shot by government soldiers. His crime was, he protested and stopped Kiryandongo Sugar Limited Workers and the army that was entering into people’s gardens purposely to destroy food crops using company tractors under the guard of guns.
More than a dozen community land-right defenders protecting Kiryandongo Sugar Limited’s forced evictions have fallen prey, either he/she is kidnapped, kept incommunicado, or tortured and later dumped in the police cells of Kiryandongo Central Police Station.  In this case, Kiryandongo district police have been used to criminalize the work of land rights defenders by opening trumped-up criminal charges against ill and wounded defenders.
Family members, who witnesses the kidnap said, Mr. Otyaluk David Richards, commonly known as Arch-bolt was found at his home, rounded him up, was handcuffed, and driven to unknown areas without giving them reasons.
“He was seated eating at around 11: 00 am, when these angry armed men came in a Double- Cabin vehicle numbered UAM 547 H. They didn’t say any word. What they did, was to hurriedly drag him into their vehicle,” one of the family members revealed.

Residents suspect that since he mobilized community members to refuse the meager compensation the company was offering in exchange for their land, Kiryandongo Sugar Limited is using the soldiers to revenge and torment him.

“Weeks ago, these company people found Otyaluk replanting his maize and beans, that the company had earlier razed down. He (Otyaluk) was accused of trespassing on the company’s land. We suspect that could be one of the reasons soldiers kidnapped and we fear he will be tortured” One of Otyaluk’s relatives said.
Otyaluk’s community is not the only one being evicted, more other families are being evicted by two other multinational companies to pave way for large-scale commercial agriculture in the Kiryandongo district. Great Seasons SMC, Agilis Partners, and Kiryandongo sugar limited have violently and forcefully evicted thousands of people since 2017.