The state of the global farmland grab, according to the Land Matrix 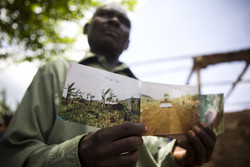 
The state of the global farmland grab, according to the Land Matrix

The Land Matrix Initiative, a collaboration between academic research institutes and the International Land Coalition, has just released a new report on large scale land acquisitions – as they call them – in the agricultural sector worldwide. The report accounts for 33 million hectares which international investors have acquired for agricultural production since 2000. This is their third such report since the initiative was launched in 2009, giving a full assessment of their data as of 2020.

In several respects, the trajectory of the Land Matrix has run in parallel to GRAIN's own work on this same problem. It was therefore with much interest that we attended the launch of this report. Four things stand out after reading it.

On the scope and scale of the problem, the Land Matrix's data is clearly improving, but there are discrepancies. For example, both the report and database's findings on Kazakhstan seem to omit a massive 60 000 hectare land deal concluded and ran by Phoenix Global, with funding from the World Bank, until Phoenix went bankrupt in 2020.

One significant problem, in our view, is that the Land Matrix only covers deals in Latin America, Africa, Asia and some countries of Eastern Europe, leaving out countries like Australia, New Zealand, Poland, the US and Canada, where huge areas of agricultural land have been taken over by corporations since 2008, particularly by companies from the financial sector.

And all of this has to be seen against the overwhelming lack of information that the Land Matrix could get on the deals. Despite "ten years of intensive data collection", and support from powerful governments, donors and multilateral agencies, they could only identify the name of the company behind the deals in 20% of the cases. Worse, the exact location of deals involving companies and governments from G20 countries could only be determined in 15% of the cases. Not a great achievement for an initiative that was "established in 2009 to address the gap in robust data on the real extent and nature of the 'global land rush'".

The Land Matrix report does align, however, with what GRAIN and numerous other groups have been saying for years about the destructive impacts of these land deals. The results from ten years of data collection by the Land Matrix are, in their words, "sobering".

Some of their key findings:

- Up to 70% of the land taken over for agriculture has not yet been put into production.

- 87% of the deals are in "high biodiversity" areas, while 39% are in even richer "biodiversity hotspots".

- 93% of all concluded deals have had no infrastructure investments materialising for nearby local communities.

- The deals generate little to no tax revenue, and many are run through tax havens.

- Nearly half the deals have involved no consultation whatsoever with affected local communities.

It is useful that the Land Matrix could correlate the GPS data that they managed to get on land deals with other data sets on forest cover. The findings are devastating, as the potential for yet further deforestation is clear. So is the link between such landscape destruction, climate change and global pandemics – just to make money for an ever more concentrated cluster of agribusiness executives.

For some reason, though, the report does not discuss the causes and drivers at all. It only talks about downstream effects and what to do about those. This is a lost opportunity, as one can only do these major exercises of wading through thousands of cases once in a while.

Another important finding of the Land Matrix report is that the growth in the number of land grabs, which has slowed down in recent years, could rise again in the near future. They give four reasons for this: biofuels, geopolitics, food inflation and post-Covid recovery programmes. Geopolitics aside, which the report doesn't actually explain, we tend to agree. But we would reframe the problem.

Many countries are facing an important energy and food crisis at this very moment. Energy supplies are not meeting the demand for various reasons: production and transport slowdowns, some of it due to Covid; decisions by suppliers; and domestic policies. This is causing energy prices to rise, which is, in turn, causing food inflation, both directly but also through the rising price of fertilisers. These two crises are inseparable, and they are further linked to the climate catastrophe as we urgently need to stop using fossil fuels and reign in large-scale agribusiness if we are to reduce emissions.

Will this translate into more land grabs? No one can say for sure. But it is true that some governments are considering potentially big new biofuels programmes, such as India and South Africa. And this is already translating into new land deals, as we recently learned about in Angola and Congo, both of which signed major deals with the Italian energy giant ENI.

Farmland is also becoming a target for pension funds and other institutional investors under pressure to demonstrate so-called "green" investments in their portfolio, giving rise to farmland funds that claim to invest in "regenerative agriculture" on the properties they acquire. The Land Matrix report does not discuss this, but "green finance" adds to the factors that could drive more corporate take-overs of farmland around the world.

The report points out that most of the land that has changed hands through these massive schemes since 2000 has been to allegedly produce vegetable oils (especial palm) and animal feed (especially soy and maise), and mainly for export. The finding emphasises what we and others have long argued: that the global farmland grab was not only corporations taking land out of the hands of local communities but corporations taking foods out of the hands of locals, too. It was part of an expansion of corporate domination over the entire food system, and this, in itself, is the central problem we face today. If this corporate power is not dismantled, land grabs will continue to subsume more and more of the world into the production of agricultural commodities for corporations to process, package and market – with all of the social and environmental destruction that the Land Matrix report documents.

4) Pie in the sky recommendations

The Land Matrix report stumbles completely when it comes to its recommendations, which are neither realistic nor grounded. For example, the team proposes to make it a condition that large scale land investors should adhere to the UN voluntary guidelines on land tenure, which do not set out to stop land grabbing and which the Land Matrix report itself states, repeatedly, are hardly being implemented. They call for transparency, especially on land deals supported by public finance, despite many examples of the deleterious role of this kind of finance in agriculture for decades. They demand that small producers be consulted and included in land negotiations or contract farming schemes and seem to believe that incorporating sustainability criteria, like pixie dust, into international investment agreements will somehow avert problems in the future. During the launch event, NGOs in the US and academics in South Africa were dumbfounded that the Land Matrix would push these kinds of remedies for the injustices and horrors that these land deals perpetrate.

The very reason we call them land grabs and not large scale land acquisitions is because of the conflict and illegitimacy that characterise them. Human rights groups have been publishing records of hundreds of land defenders being murdered every year since the land grab boom exploded, mostly by agribusiness interests. The violence, the financial criminality, the abuse of workers, women and villagers that many organisations we work with and communities on the ground deal with every day simply does not connect with the Land Matrix recommendations.

The urgency to stop these deals from moving ahead, and indeed cancelling as many as possible as swiftly as possible, stems from these realities. That is the only credible recommendation. We hope others will come to that conclusion as well.