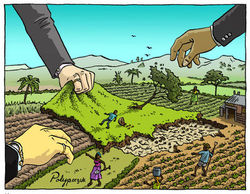 Various organisations & networks from across the world | 18 October 2021

Over 450 Public Development Banks (PDBs) from around the world are gathering in Rome from 19 to 20 October 2021 for a second international summit, dubbed Finance in Common. During the first summit in Paris in 2020, over 80 civil-society organizations published a joint statement demanding that the PDBs stop funding agribusiness companies and projects that take land and natural resources away from local communities. This year, however, PDBs have made agriculture and agribusiness the priority of their second summit. This is of serious concern for the undersigned groups as PDBs have a long track-record of making investments in agriculture that benefit private interests and agribusiness corporations at the expense of farmers, herders, fishers, food workers and Indigenous Peoples, undermining their food sovereignty, ecosystems and human rights.

PDBs are public institutions established by national governments or multilateral agencies to finance government programs and private companies whose activities are said to contribute to the improvement of people's lives in the places where they operate, particularly in the Global South. Many multilateral development banks, a significant sub-group of PDBs, also provide technical and policy advice to governments to change their laws and policies to attract foreign investment.

As public institutions, PDBs are bound to respect, protect and fulfil human rights and are supposed to be accountable to the public for their actions. Today, development banks collectively spend over US$2 trillion a year financing public and private companies to build roads, power plants, factory farms, agribusiness plantations and more in the name of "development" – an estimated US$1.4 trillion goes into the sole agriculture and food sector. Their financing of private companies, whether through debt or the purchase of shares, is supposed to be done for a profit, but much of their spending is backed and financed by the public – by people's labor and taxes.

The number of PDBs and the funding they receive is growing.The reach of these banks is also growing as they are increasingly channeling public funds through private equity, “green finance” and other financial schemes to deliver the intended solutions instead of more traditional support to government programs or non-profit projects. Money from a development bank provides a sort of guarantee for companies expanding into so-called high-risk countries or industries. These guarantees enable companies to raise more funds from private lenders or other development banks, often at favorable rates. Development banks thus play a critical role in enabling multinational corporations to expand further into markets and territories around the world – from gold mines in Armenia, to controversial hydroelectric dams in Colombia, to disastrous natural gas projects in Mozambique  – in ways they could not do otherwise.

Additionally, many multilateral development banks work to explicitly shape national level law and policy through their technical advice to governments and ranking systems such as the Enabling the Business of Agriculture of the World Bank. The policies they support in key sectors -- including health, water, education, energy, food security and agriculture -- tend to advance the role of big corporations and elites. And when affected local communities, including Indigenous Peoples and small farmers protest, they are often not heard or face reprisals. For example, in India, the World Bank advised the government to deregulate the agricultural marketing system, and when the government implemented this advice without consulting with farmers and their organisations, it led to massive protests.

Public Development Banks claim that they only invest in “sustainable” and “responsible” companies and that their involvement improves corporate behavior. But these banks have a heavy legacy of investing in companies involved in land grabbing, corruption, violence, environmental destruction and other severe human rights violations, from which they have escaped any meaningful accountability. The increasing reliance of development banks on offshore private equity funds and complex investment webs, including so called financial intermediaries, to channel their investments makes accountability even more evasive and enables a small and powerful financial elite to capture the benefits.

It is alarming that Public Development Banks are now taking on more of a coordinated and central role when it comes to food and agriculture. They are a part of the global financial architecture that is driving dispossession and ecological destruction, much of which is caused by agribusiness. Over the years, their investment in agriculture has almost exclusively gone to companies engaged in monoculture plantations, contract growing schemes, animal factory farms, sales of hybrid and genetically modified seeds and pesticides, and digital agriculture platforms dominated by Big Tech. They have shown zero interest in or capacity to invest in the farm, fisher and forest communities that currently produce the majority of the world’s food. Instead, they are bankrolling land grabbers and corporate agribusinesses and destroying local food systems.

Important examples of the pattern we see Public Development Banks engaging in:

Governments and multilateral agencies are finally beginning to acknowledge that today’s global food system has failed to address hunger and is a key driver of multiple crises, from pandemics to biodiversity collapse to the climate emergency. But they are doing nothing to challenge the corporations who dominate the industrial food system and its model of production, trade and consumption. To the contrary, they are pushing for more corporate investment, more public private partnerships and more handouts to agribusiness.

This year’s summit of the development banks was deliberately chosen to follow on the heels of the UN Food Systems Summit. It was advertised as a global forum to find solutions to problems afflicting the global food system but was hijacked by corporate interests and became little more than a space for corporate greenwashing and showcasing industrial agriculture. The event was protested and boycotted by social movements and civil society, including through the Global People´s Summit and the Autonomous People´s response to the UN Food Systems Summit, as well as by academics from across the world.

The Finance in Common summit, with its focus on agriculture and agribusiness, will follow the same script. Financiers overseeing our public funds and mandates will gather with elites and corporate representatives to strategize on how to keep the money flowing into a model of food and agriculture that is leading to climate breakdown, increasing poverty and exacerbating all forms of malnutrition. Few if any representatives from the communities affected by the investments of the development banks, people who are on the frontlines trying to produce food for their communities, will be invited in or listened to. PDBs are not interested. They seek to fund agribusinesses, which produce commodities for trade and financial schemes for profits rather than food for nutrition.

Last year, a large coalition of civil-society organizations made a huge effort just to get the development banks to agree to commit to a human rights approach and community-led development. The result was only some limited language in the final declaration, which has not been translated into action.

We do not want any more of our public money, public mandates and public resources to be wasted on agribusiness companies that take land, natural resources and livelihoods away from local communities. Therefore:

We call for an immediate end to the financing of corporate agribusiness operations and speculative investments by public development banks.

We call for the creation of fully public and accountable funding mechanisms that support peoples' efforts to build food sovereignty, realize the human right to food, protect and restore ecosystems, and address the climate emergency.

We call for the implementation of strong and effective mechanisms that provide communities with access to justice in case of adverse human rights impacts or social and environmental damages caused by PDB investments.

Friends of the Earth Europe - Belgium