What is 'green land grabbing' - and why is it surging in Brazil? 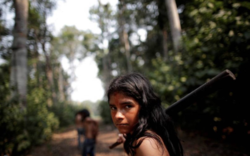 
What is 'green land grabbing' - and why is it surging in Brazil?


RIO DE JANEIRO, Sept 29 (Thomson Reuters Foundation) - As global demand for food commodities has swelled, so has the practice of "land grabbing" - where companies and individuals illegally occupy public land or indigenous territory, eventually gaining ownership through legal maneuvers, forgery or other means.
In Brazil, it's nicknamed "grilagem", from the Portuguese word for cricket, because land-grabbers would put fake deeds into a drawer with the insects so their droppings would make the papers look older and more legitimate.
Grilagem is widespread in Brazil, especially in its Amazon forest region. But in recent years, researchers say they have seen a new form arise: "grilagem verde", or green land grabbing.
What is green land grabbing?
Green land grabbing is when farmers take land, not to turn it into fields or cattle ranches but to keep it as a nature reserve.
By law, every rural property owner in Brazil must set aside a share of their land for that purpose, ranging between 20-80% depending on the region.
But these reserves can be established far away from the actual farm as long as both areas belong to the same biome.
This allows unscrupulous farmers to grab land in areas that are already protected and which they never intend to deforest, enabling them to clear more land on their working properties.
To take possession of the land, farmers first assign themselves as owners on a government-run electronic registry called the Cadastro Ambiental Rural (CAR), and then use the land as if they had the deeds.
Every rural property must be listed on the CAR - and the government is meant to check if the registration is valid but does so only for a small percentage, said University of Brasilia professor Sergio Sauer.
As no deforestation takes place, it is often years before the authorities realize an area owned by the state has been designated as a private reserve.
"It's a form of taking possession of nature. Not in a physical way ... but monetarily," said Sauer, one of the first researchers to identify the practice.
Why is green land grabbing bad?
Forests are a major buffer against climate change as they absorb and store planet-heating carbon emissions from the atmosphere, as well as regulating rainfall cycles and flooding - but global efforts have so far failed to halt the loss of tropical forests.
In Brazil, grilagem verde allows owners to legally deforest a higher percentage of their actual farmland by counting the illegally acquired land as their set-aside natural reserve.
The land taken for that purpose is often home to traditional and indigenous communities who live there yet cause minimal environmental harm, said Valney Dias Rigonato, a researcher at the Federal University of the West of Bahia.
Since farmers need that land to stay untouched, they often try to expel the occupants or limit their customary activities such as cattle-herding, he said.
Farmers may resort to the courts in a bid to evict communities, claiming they are destroying the natural habitat, he said. In other cases, they use violence.
"They establish armed militias with security guards. They threaten, they shoot," said Rigonato, who monitors green land grabbing in Brazil's Cerrado region.
In some cases, multiple farmers claim to be the owners of a single plot of land, which further complicates the issue.
In one area, Rigonato found farmers had built ditches and watch-towers for security guards to keep track of those coming in and out, effectively gaining control of land where traditional settlers claimed to have lived for over 200 years.
Why is green land grabbing on the rise in Brazil?
There is no official data on green land grabbing, said Sauer of the University of Brasilia, but the common view is that it is a relatively new and growing phenomenon.
Researchers believe land grabbing in general has surged since 2016, when former President Michel Temer came into power.
Temer published a decree, later voted into law, making it easier for farmers to obtain title deeds for lands they had occupied as recently as 2011, according to Brenda Brito, a researcher at Imazon, a nonprofit that promotes sustainable development in the Amazon.
The law signaled to farmers that land grabbing was profitable because they would eventually be able to legalize their acquisition, she said. The trend continued when far-right President Jair Bolsonaro came into power in 2019.
Bolsonaro has publicly supported deforestation and land grabbing on indigenous territories.
In August, the lower house of Congress passed a bill that allows squatters on public land to gain deeds more easily, proposed by Bolsonaro to please farmers who backed his election.
"We are in a process of legalizing land grabbing," said Brito. "And this is being done through laws."
What can be done to fight the practice?
Sauer said it was essential to strengthen state and federal environmental agencies so they can check whether farmers really own the lands they claim to possess.
But after taking power, Bolsonaro weakened those agencies by slashing budgets and reining in their efforts to crack down on illegal loggers and miners, he added.
Only recently has the president started to reverse some of those policies, for example by hiring hundreds of enforcement agents in a bid to halt destruction of the Amazon rainforest.
"I don't think we can expect anything from the current administration," Sauer added.
Another counter-measure is to guarantee legal tenure to traditional and indigenous communities for the lands where they live, said Rigonato.
If they have clear rights to reside there, they can stop farmers from using forged papers to take it.
"(Land rights) are fundamental but difficult to guarantee due to the state's bureaucracy," said Rigonato, adding progress was not going fast enough to stop green land grabbing.
Original source: Reuters
TWITTER
FACEBOOK
WHATSAPP
PRINT
E-MAIL
TWITTER
FACEBOOK
WHATSAPP
E-MAIL