The Sangha Region in the Republic of Congo

The conference of Berlin, as illustrated in 1884, which established the rules for the conquest and partition of Africa. (Image: Wikicommons)
WRM | September 2021


The Sangha Region in the Republic of Congo
There is a serious risk that conservation and extractive industries will exert full control over tropical forests by implementing so-called ‘nature-based solutions.’ (1) These include large-scale carbon offset projects and the creation of more protected areas, as well as the continuation of supposed ‘sustainable’ logging and industrial tree plantations. Nevertheless, it is important to understand the implications that such territorial control can have on forest-dependent communities.
The heavily forested Sangha region in the north of the Republic of Congo is one example of how territories can end up entirely under the control of conservation and extractive industries. Three concessions occupy almost the whole region: one held by the palm oil company Eco-Oil Energie SA, one by the Odzala-Kokoua National Park and one by the logging company Industrie Forestiere d'Ouesso - IFO (see map). 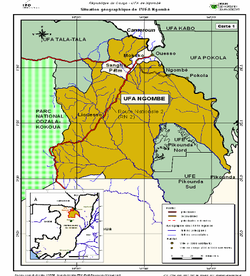