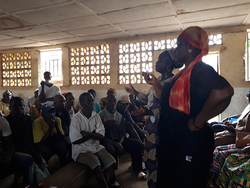 Aminata Fabba of MALOA talks about the struggles of the women in Malen to get their lands back from the SOCFIN agribusiness company to a gathering of villagers in Mamanka, Bureh Chiefdom, Port Loko, Sierra Leone, as Aminata Massaquoi records her testimony, 20 February 2019 (Photo: GRAIN)
WRM | September 2021