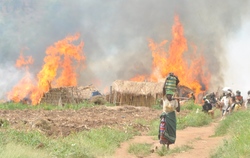 Houses of villagers in Mubende Madudu, Uganda set on fire during an eviction for agribusiness.
Ugandan land defenders | 20 September 2021


Local land grabbers evict villagers at night; foreign investors cultivate the same lands the next day
In Uganda, land remains the most sought–after natural resource, however legal and structural mechanisms have not been effective in addressing illegal land evictions faced by vulnerable communities. Most local investors have taken advantage of the structural gaps in land administration which have exacerbated the issuance of multiple titles. This has been compounded by Uganda’s weak justice system and excesses perpetrated by some police officers and the military.
In recent times, the country has witnessed catastrophic forced evictions across the country including Mubende, Kiryandongo, Wakiso, and Amuru districts. These evictions are synonymously connected to gross human rights violence which includes rape, extra-judicial killing, and destruction of homes and farms against lawful landowners.
In the circumstances, the affected families are denied adequate compensation and left homeless. They are removed from areas that they formerly called homes and cultivated for decades. Even those that get a chance to be paid are paid peanuts. For instance, in the Kiryandongo district residents were paid as little as UGX. 100,000/= equivalent to 28.39 USD for them to leave their land. Those who refused were evicted forcefully.

A random survey carried out by this defender also indicated that about 45% of the grabbed land has not been utilized, yet it is tightly guarded by the army, police, and private security guards.
The current patterns indicate that upon a successfully forced eviction by local faces of brokers, in a blink of an eye, the grabbed land is handed over to foreign investors/multinational companies and in most cases, they (investors) grow the same crops the project affected persons were growing before.
In the Kiryandongo district, a local land broker Mwesigye Reuben caused the dispossession of thousands of poor families. He, in company with the senior lands officer at the Kiryandongo district land board John Lubambula, allegedly changed the ownership of that land, and with the help from Kiryandongo district police plus other private security firms, carried out forced evictions before the land was handed over to the Great Seasons SMC limited.
Great Seasons SMC limited, owned by a Sudan investor, is one of the multinational companies that have forcefully evicted more than 35,000 smallholder farmers. Other multinational companies include Kiryandongo Sugar Works limited and Agilis Partners Limited.

Earlier this year, a joint team of detectives from the Land Protection Unit, Special Investigations Unit (SIU), and Criminal Intelligence and Investigation Directorate (CIID) arrested Mwesigye and Lubambula and later charged them with three counts including fraud by Masindi Chief Magistrate’s Court.

Mubende, one of the forced eviction hot spots in the country, witnessed the rage of one George Kaweesi, who, with help of Mubende district police and private security firms, carried out a forced eviction of over 3500 villagers in Kambuye, Kikono, Kyabaana,Kanseera, and Lwensanga. The land is adjacent to the Kaweeri Coffee plantation. It’s alleged that four years after this land was grabbed, it has remained unutilized but being guarded tightly by one of Uganda’s popular private security firms, and the exercise of planting of coffee is secretly taking place.

It’s important to note that some of the victims in that particular eviction were hitherto evicted by the Kaweeri Coffee Plantation Limited 20 years ago with compensation.
In 2013, Karangwa Moses grabbed and violently evicted over 17000 people from 20 sq. miles in Kayunga district. Within a short period, farm equipment and workers from Kakiira Sugar Works Limited, a subsidiary of Madhvani Group started cultivating the land.