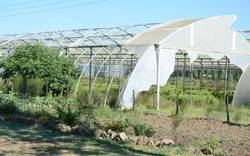 Some of the greenhouses in Naivasha-based Karuturi flower farm which was put under receivership seven years ago leaving over 3,000 workers jobless. [Antony Gitonga, Standard]
The Standard | 22 July 2021

At the height of its operations, the Naivasha-based Karuturi flower farm produced over a million stems of roses - making it the largest producer in the country.

With over 3,000 workers, the former Sher Agencies flower farm was the envy of many as it continued to export the roses to the European Union market.

However, seven years after the farm was placed under receivership due to debts owed to Kenya Revenue Authority (KRA) and a local bank, the final nail has been hammered on its coffin.

On Monday, the Supreme Court gave Stanbic Bank the go-ahead to sell the assets of the farm in a bid to recover a loan of more than Sh1.8 billion. And as the full effects of the court ruling sink in, workers, unionists and area leaders have expressed their concern over the fate of the once towering floriculture giant.

On one side, the former workers have expressed their fears that they could lose all their life savings, with the union promising to fight for them as leaders told of the lost opportunity in the sector.

According to a former workers representative, Samson Auda, they were owed over Sh300 million in salary arrears, union dues and savings.

He termed the court ruling a shocker since the owner had shown interest in repaying the debts owed to the bank and other institutions. “Since the court has ordered that the farm’s assets be auctioned, all that we are asking for is our dues, which many struggled for over 30 years to earn,” he said.

He added that many of the workers had died while others had relocated from Naivasha after years of waiting for their dues.

The Kenya Plantations and Agricultural Workers Union (KPAWU) through its Naivasha branch secretary Ferdinand Juma said they were keenly studying the court ruling.

He termed the move to auction the farm’s assets a major blow to the sector and the hundreds of workers. “We fully respect the court’s decision and at the moment, we are keen to make sure that workers get their rightful dues just like other institutions that were owed by the farm,” he said.

Juma expressed concern for the future of the tens of acres along Lake Naivasha that were once covered by a variety of roses.

“We fear that those who will buy the farm could turn it into residential homes or hotels, thus locking out tens of potential floriculture workers,” he said.

Olkaria MCA Peter Pallang’a noted that workers would be the biggest losers following the ruling that okayed the auction of the farm’s assets.

He added that the ruling was a major blow to the economy of Naivasha, noting that at the height of operations, the farm employed over 3,000 workers.

“This is a big blow not only to the workers, but also to the economy of Naivasha as the farm is one of the leading employers both directly and indirectly,” he said.

Surya Holdings Ltd and RHEA Holdings had moved to the Supreme Court arguing that they were denied the opportunity to challenge the contents of the audit report by Deloitte Consulting Ltd.

However, a five-bench-judge ruled that there was no issue of a constitutional nature for the court to determine in the dispute.