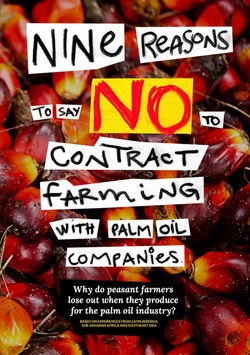 The booklet is also available in Portuguese, French, Spanish and Bahasa Indonesia.
This publication explains how contract farming with palm oil companies works, and why it is a serious threat to peasant farming and food sovereignty. The booklet looks at nine of the most common promises that companies make, and most importantly, the information they conceal behind each promise. The publication is available in English, Portuguese, French, Spanish and Bahasa Indonesia.


The main focus of industrial palm oil companies is to maximise their profits. Their goal is to keep production costs as low as possible and to sell as much palm oil as they can. The more land they can control, the more palm oil they can sell.

With the full support of governments and financial institutions, palm oil companies have taken control of millions of hectares of land. They have destroyed and contaminated fishing grounds, fertile soils, water sources and forests. This corporate takeover of community land has also resulted in violence against people living in and around oil palm plantations, including abuse and sexual violence against women. The few jobs on plantations that are available to community members are poorly paid and dangerous.

Because resistance to these large-scale concessions is rising, companies have started to use different strategies to take control of community land. One of these strategies is to create smallholder, or outgrower schemes. Other names for this are contract farming or alliances with smallholders.

What companies do is propose that peasant farmers grow oil palm on their own land, and in turn, the company will buy all the oil palm fruit they produce. Governments usually support these schemes, which are presented as a win-win deal. But in fact, they are a trap. Peasant farmers accumulate debt right from the start, lose the freedom to decide who to sell their production to, face strict restrictions on planting other crops, and give up autonomy and even their land. These are some of the major consequences for peasant farmers who get locked into contract farming. Experiences in Latin America, sub-Saharan Africa and Southeast Asia have already shown this.

Contract farming allows oil palm companies to control more land and increase their production without being accused of land grabbing or evicting peasant families. Governments have also started to promote these schemes, in order to avoid the social conflicts that tend to arise when large concessions are handed over to corporations. Furthermore, contract farming has become a tactic for palm oil companies to access new, often public funding from development banks, aid agencies, governments and other funders.