Land grabbing in Cambodia: 80 Bunongs sue in France, but their case is dismissed at first instance

Land grabbing in Cambodia: 80 Bunongs sue in France, but their case is dismissed at first instance 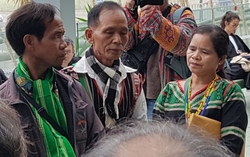 Bunong representatives at Nanterre court, October 2019 (Photo : GRAIN)
The private French industrial group Bolloré has won the first round of the legal offensive launched against it by Cambodian farmers in 2015. On 2 July, the 6th Civil Chamber of the Nanterre Judicial Court (TJ) - the judicial jurisdiction on which the company depends - ruled that the action of the 80 Bunong who accuse the Breton industrialist of illegally seizing their land and their sacred forest, destroying their places of life and worship, as well as century-old trees considered to be divinities, in order to install rubber tree plantations.

A minority community of itinerant and animist farmers, living in self-subsistence in the highlands of Mondolkiri province, in the eastern part of Cambodia, the Bunong - an ethnic group of about 37,000 people - believe they have been robbed of nearly 7,000 hectares of their land. The dispute dates back to 2008, when the Cambodian government, keen on foreign investment, granted this vast concession to Socfin-KCD, a joint venture created a year earlier between the holding company Socfinasia, a Luxembourg company in which the Bolloré Group is a shareholder of nearly 39%, and Khao Chuly, a local construction company close to the central power.

Their "expropriation" has generated a "loss of income" and "deprived them of their means of subsistence", the Bunong argue. In the summer of 2015, through their French lawyer, Fiodor Rilov, they started a tort action against the Bolloré group, but the court decision of 2 July does not augur well for a quick trial on the merits that they are demanding.

"None of the 80 plaintiffs and voluntary interveners can justify a real or personal right to exploit the disputed land", "the action taken by each of them will therefore be declared inadmissible for lack of capacity and interest in acting", says the 39-page document that Le Monde has consulted.

This case - in which the plaintiffs are also ordered to pay a procedural indemnity of 20,000 euros to the Bolloré group, as well as to its subsidiary La Compagnie du Cambodge - illustrates the difficulty of indigenous peoples to assert their rights against multinationals. The Bunong do not speak Khmer, the official Cambodian language, and live on the margins of society. They have neither identity documents nor property titles. Most of the land-related documents were destroyed by the Khmer Rouge in the 1970s.

In November 2019, the TJ of Nanterre had "invited" the Bunong claimants to submit documents proving their civil status and establishing the existence of the land concerned and their links to it. But, according to the decision, they were too slow to comply with this request.

Rilov immediately appealed to the Versailles Court of Justice. "The last part of the documents that had to be translated from Bunong to Khmer and French during the health crisis was submitted to the court in November 2020, which rejected them, even before setting the date of the hearing for 31 May 2021, i.e. almost six months later, which left plenty of time to include them in the debates, so that the opposing party could examine them," deplores the Cambodian farmers' counsel.

The lawyer recalls that "international law for the protection of indigenous peoples does not require the formalisation of ownership or even the notion of ownership to give them the possibility of claiming their prerogatives over the land that is theirs." Among the documents rejected, "a copy of a report written in French at the request of Socfin-KDC which analyses the damage caused at the very moment of the installation of the plantations and provides a forecast of future damage," which he is anxious to see examined on appeal.

The "duty of care" of ordering companies

A specialist in social causes, Fiodor Rilov has also rallied the CGT union of French Michelin tyre factory employees to the Bunong cause. “Its statutes give it the mission of denouncing attacks on the environment," explains Mr Rilov. “On 23 February 2021, it therefore filed a voluntary intervention brief in support of the Bunongs, which allowed us to reintroduce the rejected documents and to add the union’s own request for compensation for environmental damage.”

This action was also deemed too late and was also rejected. "The judge totally ignored it, which is not in order because any intervention is admissible even after the investigation is closed", the lawyer says. At the hearing on 31 May, the court finally separated the two cases and opened a second procedure itself, taking the union into account, "so that the interveners are now on their own", says Mr Rilov.

The "difficulties encountered" and the "unprecedented position" of the court do not surprise the lawyer, however. These actions will allow the French judge to take a position on the 2017 law on the duty of care of parent companies and contractors [which must now publish a due diligence plan identifying risks and preventing serious violations of human rights and fundamental freedoms and the environment]," he said. This is also the first time that victims have taken legal action themselves in the country where the multinational is headquartered, without the intervention of Western NGOs.

This element is also bothering the opposing party. “Who went and canvassed, six years ago, these brave Bunong, who live near the rubber plantations, by making them believe that the damages they would receive would be astronomical, even though the case was lost in advance?" asks Dominique De Leusse, one of Bolloré's lawyers. “This is a legally unfair and morally unacceptable procedure, and we are going to repeat, on appeal, the same comedy as in the first instance, consisting of responding to unbearable accusations of neo-colonialism, which are not even backed up by documents.”