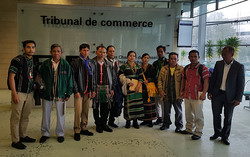 Les représentants des Bunong au Tribunal de Nanterre, le 1er octobre 2019. (Photo : GRAIN)
Eighty Cambodian farmers of the Bunong ethnic group were dismissed on Friday by the judicial court of Nanterre. They believed that they had been robbed of their ancestral forest by the Bolloré group, who replaced it with rubber plantations. The farmers' lawyer has appealed against this judgment.

Judicial victory for the Bolloré group. Eighty Cambodian farmers of the Bunong ethnic group who were attacking the French group for illegally seizing their land were dismissed, Friday 2 July 2021, by the judicial court of Nanterre, near Paris, according to the decision consulted by AFP.

The Bunongs, an itinerant and animist community in eastern Cambodia, blame Bolloré for the destruction of places of worship and century-old trees considered as deities. They feel that they have been robbed of their ancestral forest, which was replaced in 2008 by rubber plantations.

In response, they launched, in 2015, a series of protest actions against the Bolloré company and [its subsidiary] the Compagnie du Cambodge.

The plaintiffs claim, among other things, that "their expropriation has resulted in both a loss of income and has deprived them of their livelihoods."

In the judgment rendered on Friday, "none of the 80 plaintiffs and voluntary participants can justify a real or personal right to exploit the disputed lands". "The action taken by each of them will therefore be declared inadmissible for lack of standing and interest in acting" [before the court], the decision states.

In November 2019, the Nanterre court had invited the farmers to produce evidence establishing the existence of the lands and a document justifying the civil status of each of them.

"This judgment is astounding, and out of step with international law for indigenous peoples, because the court rejected the documents that establish the identity and relationship with the land of my clients," said the lawyer of the peasants, Attorney Fiodor Rilov, to AFP. He has filed an appeal at the Court of Appeal of Versailles, near Paris.

The farmers must now pay a "procedural indemnity" to Bolloré and the Compagnie du Cambodge of 20,000 Euros, according to Friday’s ruling.