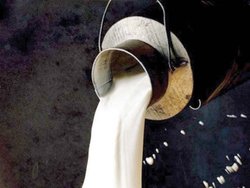 On June 20th, 2021, Pakistan Kissan Mazdoor Tehreek district Shikarpur held its 2nd District Convention on issues surrounding ‘Industrial Agriculture and Agricultural Landgrabing’. The convention was attended by small and landless farmers from across the district. Highlighting the impact of corporate agriculture on farmers and agriculture workers, Ali Gul, a PKMT member, said that Pakistan is an agro-based country and 70% of the population is directly or indirectly involved with agriculture. Across the country, our farmers produce a huge variety of crops and it is because of their efforts that we are ranked as the top ten producers in the world for the production of wheat, rice, cotton, sugarcane, maize, vegetables, meat and milk. However, a handful of capitalists and feudal lords have monopolistic control over the production in the agriculture sector. Corporate agriculture is the key culprit behind the inequitable ownership over resources and it has completely eroded our traditional agricultural practices and industrialized the agriculture sector. Corporate agriculture was first enforced in the 1960s through a set of agricultural policies referred to as the ‘Green Revolution’. However, only the landlords and capitalists could afford these high-cost inputs of Green Revolution. Simultaneously, farmers’ livelihoods were threatened and not only did they lose their traditional seeds. Women farmers and agriculture workers bear the brunt of these devastating impacts since they are closely involved in all stages of agricultural work, including the harvest stage. Farmers have a right to own and control land, seed and other critical productive and natural resources for growing chemical/pesticide-free, hybrid/GMO-free food.

Hakim Gul, another PKMT member, said that Shikarpur is historically associated with trading. District Shikarpur has a population of over 12 lacs. Over the past few years, agricultural land grab has been carried out under the pretext of establishing housing societies in riverine areas and cities both. Farmers are forced to sell their agricultural land and government officials, powerful feudal lords and capitalists are complicit in committing in these crimes against farmers. Gul voiced a pressing concern – where will farmers grow food if agricultural land will be sold off for the construction of petrol pumps, housing societies and hotels? Mr. Hakim demands genenune land reforms and self-reliance in food and agriculture, decent livelihood for peasants.

Shaukat Ali, another PKMT member also highlighted that Pakistan is the fifth largest milk producer in the world. Milk is an integral component of people’s diets. However, in recent years, fodder shortage is causing a rapid decline in Shikarpur’s milk production. To establish hegemonic control over the dairy sector in Pakistan, large-scale dairy corporations are leading a campaign to malign fresh milk and establish that it is hazardous for human health. Furthermore, to influence public consensus on the issue, they regularly float advertisements on television and in newspapers. Women farmers and agriculture workers are at the very helm of livestock management in the country; they are responsible for growing, cutting and providing fodder for milk-producing cattle and are also responsible for milking and tending to livestock. Yet, women farmers are facing a threat to their livelihoods from companies whose only aim is to profit from their hegemonic control over the dairy and livestock sector.

Gul Hassan, a former district coordinator PKMT raised the issue of forest land grab. He said in Shikarpur, there are frequent clashes between police personnel and dacoits. Locals are questioning whether the dacoits are merely being used as a ploy to grab forest land in Shikarpur. Their claims are not baseless; police search operations within the Tigani forest have forcefully evacuated residents from multiple villages in the area. In their attempts to catch the dacoits, they are felling trees and setting them on fire. The government should urgent action on the matter and convey the truth to the public.

Ali Nawaz, the former provincial coordinator, Sindh mentioned that majority of agricultural land is owned and controlled by a few influential feudal families, leaving a large proportion of the farming population landless or in control of small landholdings. At the same time, farmers are deprived of all autonomy in the free market economy. The combined impact of rising inflation and anti-farmer policies has pushed farmers and agriculture workers into a life of poverty and hunger.

The participants of the convention demands following:
1. Put an end to neoliberal agricultural laws and corporate control of the food and agriculture sector that disadvantages local farmers, small producers while allowing corporations and landlords to reap super-profits.
2. Ensure that farmers are not displaced from local/indigenous land specially form forest land and that no further land grabbing of resource grabbing is carried out under the pretext of development.
3. Prioritize just, equitable and genuine land reforms that allow land redistribution to landless farmers, including women agriculture workers so as to ensure food security and food sovereignty for all farmers.
4. Put an end to local and foreign private investments in the dairy and livestock sector and implementation of policies that favor small livestock and milk producers.